Is limiting global warming to 1.5°C possible? And if so, what role can business play? WaterAid's Senior Analyst on Climate Change, Jonathan Farr, reflects on the latest IPCC report and highlights the role of NGO/private sector partnerships in building resilience to climate change.

Last month the Intergovernmental Panel on Climate Change (IPCC) published its report on the challenges of limiting global warming to a more ambitious 1.5°C rather than 2°C, and the consequences of exceeding it.

The report made many stark warnings that highlight the need to urgently cut carbon pollution, and spelled out the threat to the world’s water. It found the regions at disproportionately higher risk include Arctic ecosystems, dryland regions, small-island developing states, and least developed countries.

Limiting global warming to 1.5°C, compared with 2°C, could reduce the number of people both exposed to climate-related risks and susceptible to poverty by up to several hundred million by 2050, and also reduce the proportion of the world population exposed to a climate-change induced increase in water stress by up to 50%.

While the report rightly gained headlines, an even starker warning from China Water Risk should have also made politicians and businesses take notice. The report No Water No Growth looked at the specific threats to Asia’s 10 mighty rivers, which generate US$4 trillion and on which 40% of Asian people depend. Indeed just one of these rivers, the Yangtze, supports 43% of China’s population, 43% of GNP, and produces 65% of China’s rice crop. Yet these rivers are under threat from over-abstraction, pollution, environmental degradation, all of which are exacerbated by climate change.

Households, towns and businesses are all dependent on reliable water supplies, but as the world warms up and water supplies become increasingly threatened, many face a thirsty future, with economic chaos not too far behind.

In January, Cape Town made headlines as the world famous tourist destination faced Day Zero – the day when the city’s water supply could officially be turned off. Meanwhile a recent report from NASA shows that groundwater in many regions –  including cities and villages in northern and central India, Bangladesh, Myanmar, southern Madagascar, southern Mozambique and parts of California and Australia – is severely depleting as climate change, alongside other factors, takes hold.

These impacts are not extreme cases; they are early warnings of a crisis that will strike at the heart of global prosperity. If we ever had the luxury of ignoring threats to our water supplies, those days are long gone.

The IPCC’s report makes it clear that a minimum of 1.5°C temperature increase is locked in, and indeed some have dubbed even that figure as "magical thinking". We have moved beyond mitigation and must now seriously take on the challenge of building resilience and adapting to a new environment. For the communities WaterAid works with, acknowledgment of these challenges is not happening fast enough. With new solar power capacity exceeding fossil fuels and nuclear combined in 2017, we can see how low carbon tech is now mainstream, and how public finance, subsidies and international action has catalysed private investment. But while we still need to see more spending on mitigation, spending on adaptation at $23bn in 2016 is just 6% [Climate Policy Institute 2017] and the bulk of that was public finance.

It is time for business and investors to recognise this challenge of a global upgrade in water services and systems. By 2030, investment in water and sanitation infrastructure will need to be around US$0.9–1.5 trillion per year, roughly 20% of the total investment required for global infrastructure. About 70% of this will be in the global South with a large share in rapidly growing urban areas.

Some are already taking action. In November last year, HSBC announced renewed targets and commitments to a low carbon future, in addition to other sustainability initiatives. Since 2012, HSBC has worked in partnership with Earthwatch, WaterAid and WWF through the HSBC Water Programme to supports projects globally which promote and conserve clean water sources. The initiative was built on the reality that water is essential to helping communities thrive and building national economies.

Climate resilience is a core part of WaterAid's work with HSBC in Bangladesh, working together to build climate-resilient services in places like Dacope, where water supplies are depleting as a result of climate change, while improving the quality and accessibility of water sources. Implementing measures such as raising water points above flood levels, and running hygiene promotion sessions to help reduce the spread of waterborne diseases prevalent after flooding, can have a huge impact on mitigating the effects of climate change. The security of clean water is enabling children to stay in school, and small businesses to continue growing. 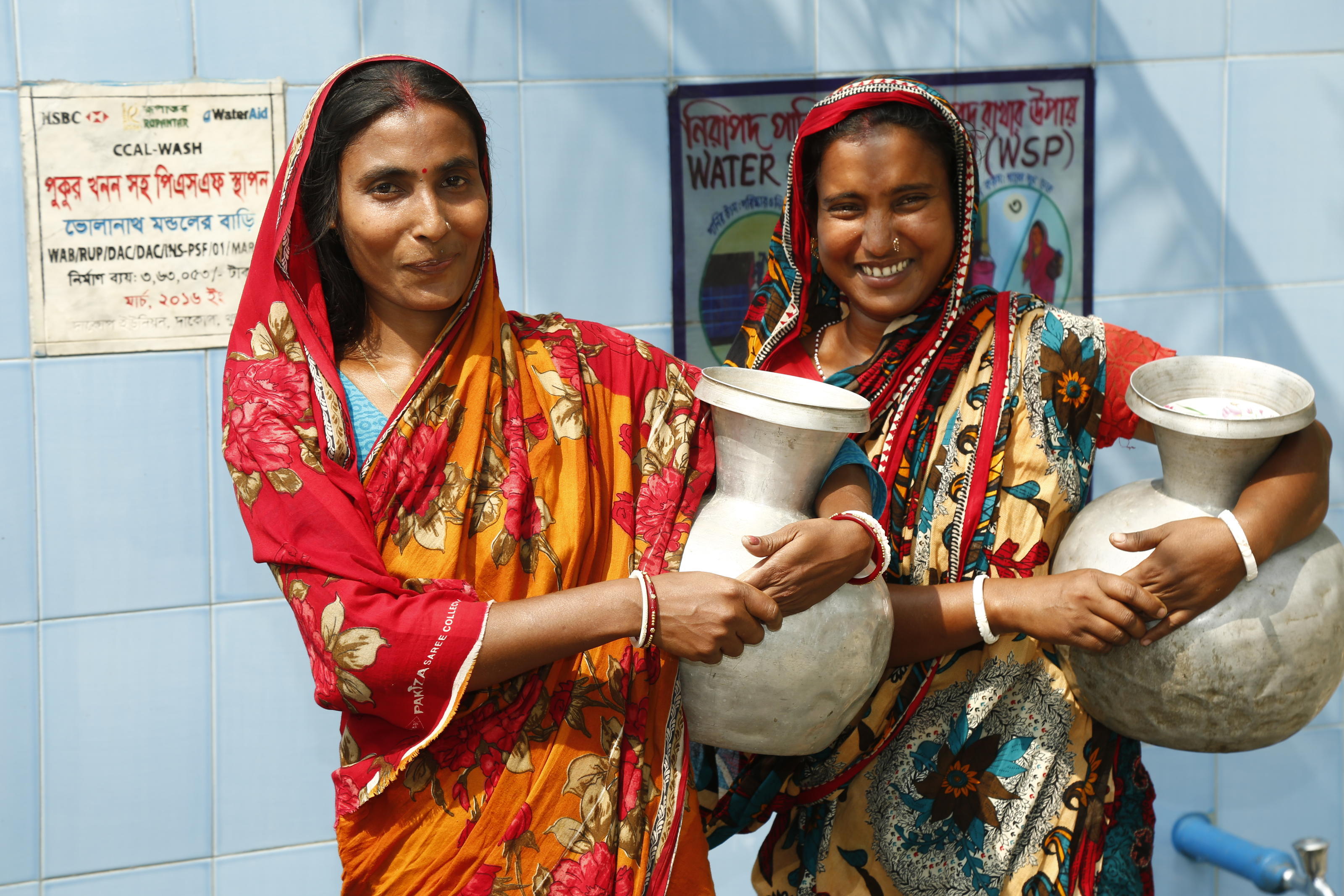 HSBC’s partnership with WaterAid is reflective of a shift in private-NGO partnerships, in which we are seeing progressive companies shifting perspectives from engagement with the charity sector as philanthropic issue to a core business priority. HSBC is embedding sustainability and water, sanitation and hygiene (WASH) management elements within their business strategies to drive greater action on key issues such as water security and climate change. Business activities can have potential environmental and social impacts which need to be managed through responsible business practices and standards. For example, ensuring that businesses ensure adequate WASH in the workplace as a minimum.

Diageo, Gap Inc. and Unilever have worked with WaterAid to develop a Business Case for WASH – a guide to help companies understand and measure the economic benefits of investing in water, sanitation and hygiene, and thereby make the case for further investment while also encouraging their supply chains to take action.

It is estimated that every dollar invested in water and sanitation returns US$4 in increased productivity. The guide aims to provide the micro-economic case for a business to demonstrate the financial value of this investment, in order to encourage wider corporate action towards Sustainable Development Goal 6.

HSBC and WaterAid are now putting the guide into practice with the launch of a three-year project to deliver essential water and sanitation services in apparel factories and nearby communities in Bangladesh and India operating within their supply chain.

Diageo has also developed a Water Blueprint, which aims to reduce the company's water use through a 50% improvement in water-use efficiency, as well as returning 100% of wastewater from its operations to the environment safely, and replenishing the amount of water used in its final products in water-stressed areas.

At a national level, farmers – responsible for over 70% of fresh water use - are increasingly moving to more water efficient processes. In industry, the shift to renewables away from fossil fuels, not only cuts pollution but dramatically cuts water use too. But it remains the case that we need to see a paradigm shift in political will combined with unparalleled ambition and urgency if we are to meet this global challenge.

The costs of climate change are already with us, but the benefits of taking action are hopefully not too far away. Access to safe water does not just mean avoiding tragedy, it is transformative for communities, potentially bringing healthier lives, massively increased economic prospects, and sustainable cities, towns and communities for hundreds of millions of people.

An edited version of this blog was first published on Ethical Corporation on 29 November 2018.

Find out more about WaterAid's work on climate change >

Calendars and quizzes: how apps can help teach girls about their periods

Mission-critical: why investing in water, sanitation and hygiene is crucial to a healthy and green economic recovery