'It’s time for women to stop confining themselves': how access to clean water is a catalyst for women's empowerment

Access to clean water is a women's rights issue. This International Women’s Day, we share the story of Gita Roy and how reliable water services can be a catalyst for women's empowerment in more ways than expected.

Gita Roy lives in Khulna, southwest Bangladesh, a region where finding clean drinking water is a daily challenge. In recent years, the changing climate has increased the salinity of the water and contaminated groundwater aquifers in the region. With freshwater supplies dwindling, Gita and other women in her village, Tengrakhali, must walk for hours every day to find water that's fit for drinking.

“Married into a family of 14-15 members, I had no choice but to tread that distance along with other women to collect water amidst several other never-ending household chores,” says Gita. “I remember secretly wanting to go back to my village during the early days of my marriage."

The daily journey to collect water, coupled with a host of other household responsibilities, leaves women like Gita excluded from employment, education and decision-making, both in the family and the wider community. But despite the hardships she faced early on in her marriage, Gita remained resolute and continually challenged gender norms in her community. She started studying at Assassuni College, but had to put her education on hold when, at the same time, she became pregnant and her father-in-law fell ill.

The start of a solution

Around this time, WaterAid was embarking on a new project in Khulna. Funded by Severn Trent Water, the project included establishing three reverse osmosis plants, rainwater harvesting systems in healthcare facilities and schools, as well as other improvements to sanitation infrastructure and health education in the region.

Compelled to help find a solution to the challenges of collecting drinkable water, Gita signed up to establish a community reverse osmosis plant, which converts saltwater to drinkable water. Gita formed a committee, named Golap Dol (Rose Group), with 10 other women in the community to maintain the plant and develop business plans to sell the water to the local community at an affordable price. Rupantar, a local NGO, provided three days of intensive training in the day-to-day running and maintenance of the plant, and shared information with the women about female empowerment.

The women faced a backflash at first – some members of the local community considered the work inappropriate for women. But Golap Dol was undeterred. Gita and the other women in the committee went door-to-door to tell the community about the new plant and how it could improve their lives.

“We approached people at home, at work, at places of gatherings multiple times talking about our water quality and the health benefits," says Gita. "It takes time to change people’s mindset and behaviour."

In February 2020, the Moricchap Drinking Water Plant was inaugurated in the presence of regional council members, and the chairman of the local government. Gita made an inaugural address in the ceremony which drew a crowd of more than 250 people from the surrounding villages.

“I struggle to find words to describe what I felt [in] that moment facing a huge wave of people. Later that day, we distributed free water to all the villagers," says Gita. "Swarms of people came to our plant throughout the day to collect water and I could see all the hard work and passion to reach our villagers with safe water of Golap Dol coming to fruition."

Today, the plant serves the demand for water for nine surrounding villages. The Golap Dol committee has continued to maintain the plant and develop their business plans, and the plant has become increasingly profitable and efficient. Between April and September 2021, Gita’s committee recorded profits of 29,648 BDT, which is more than £260.

A catalyst for empowerment

The water plant has transformed the lives of the women managing it in many ways.

“As shareholders, we have been putting money in the operation and maintenance fund since the first day, as we had a target to reach," says Jayanti, one of the three caretakers of the plant. "All the villagers greatly rely on our plant for drinking water. We are treated with respect and warmly welcomed everywhere we go. This is something that money cannot buy. We are better positioned within our families as well and our advice is sought whenever a decision is made within our households. Also, now that we do not have to walk miles after miles carrying water, [we have] a lot of free time to use in other productive activities, [to] take care of our families or give ourselves some rest.” 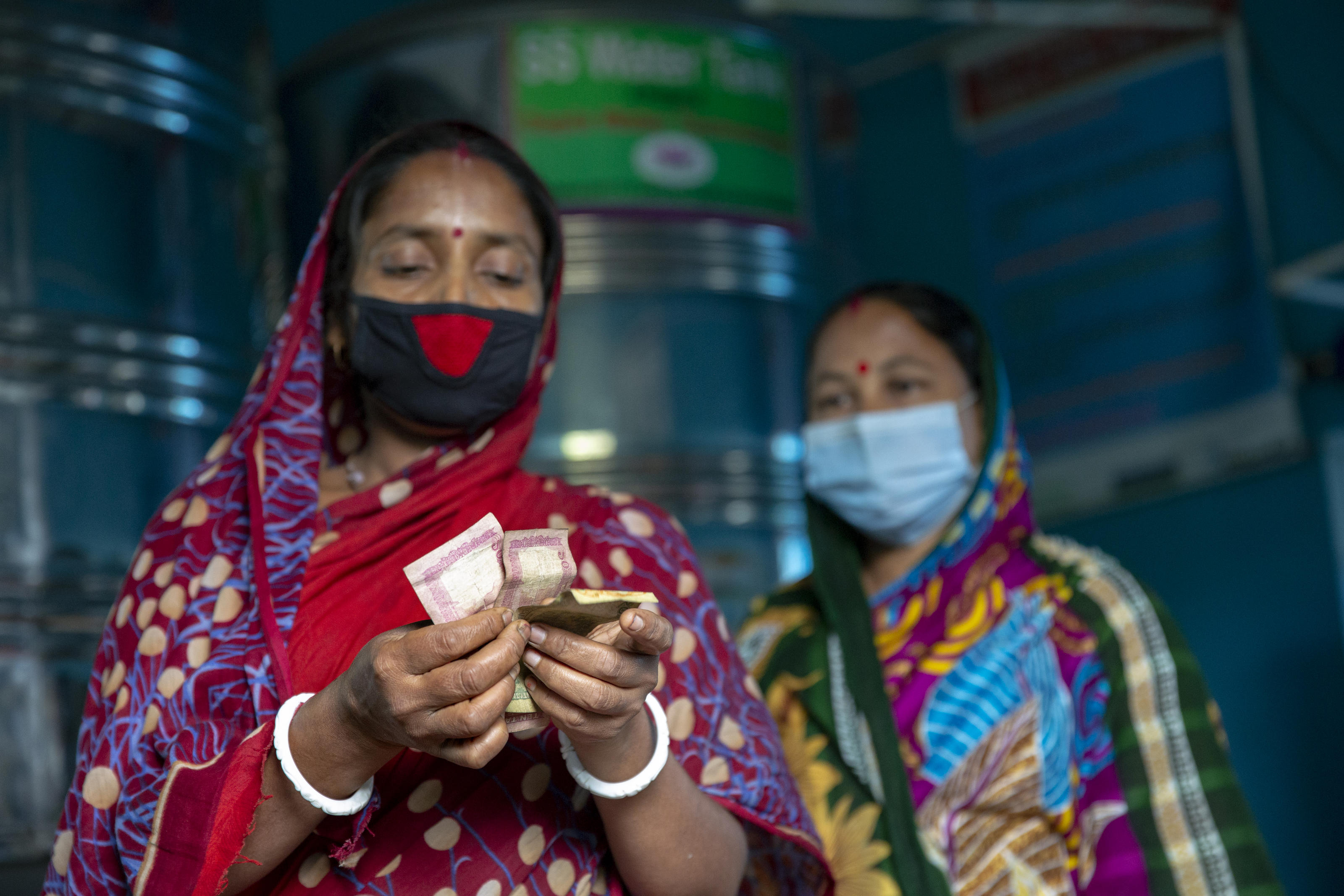 The committee members have also started a bank account to save the surplus income generated from selling water. The women can withdraw money from the savings account to reinvest in other income generating activities. Jayanti, for example, has recently bought a sewing machine to make her own clothes and provide tailoring services to member of the community.

Gita and the Golap Dol committee are now household names in Tengrakhali. So much so that she was recently elected by community members as their representative in the Union Parishad elections. Empowered by her experience, she wants to inspire others.

“As a woman, I want to keep working to empower our deprived women to have more control over their lives. Having my own identity, earning my own income, and not depending on anyone for my needs is very satisfying. It’s time for women to stop confining themselves and their potential within their households only."

Find out more about WaterAid's partnership with Severn Trent Water.

Women in the WASH sector: is being invited to the party enough?

Closing the gender gap: access to water and toilets is a justice issue for women