As another Human Rights Day dawns with 256 million people across West Africa lacking a decent toilet, Kiné Fatim Diop and Akosua Ogyiri lay out how political leaders have the power to change this.

As West African women, we are no strangers to poor quality toilets, especially in public spaces. We often find ourselves refusing to eat or drink in public, whether it’s at school, the market or stadium, just because we want to avoid using the toilets. We even avoid certain places when it is our time of the month because most public toilets are not fit for use during our menstrual cycle.

Simply ask a few friends to share their stories and the responses will be the same: tales of dirty, smelly and poorly managed toilets – not to mention the broken locks, damaged taps and muddy floors. For many West Africans, these unpleasant experiences are not limited to public places, but experienced every day at home. 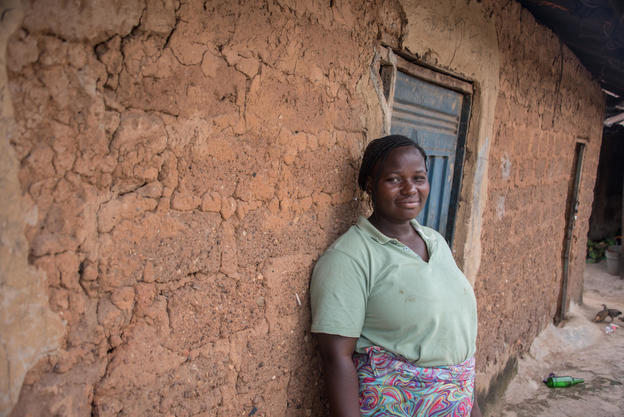 Moradi Sunday lives in Kpebi village near Asokoro, Abuja, Nigeria. Her family doesn’t have a decent toilet so are forced to go outside. She said that, when pressed at night, people in her compound have no choice but to keep faeces in the house until they can dispose of it in the bush first thing. WaterAid/ Nelson Owoicho

A lack of sanitation is a denial of human rights

As we mark Human Rights Day, we are reminded that in 2010 the United Nations General Assembly adopted a historic resolution declaring "the right to safe and clean drinking water and sanitation as a human right that is essential for the full enjoyment of life and all human rights". This right entitles everyone to safe, affordable, private and dignified sanitation without discrimination. However, almost 256 million people across West Africa have no access to a basic facility at all.

A lack of sanitation is an affront to an individual’s dignity, with its rippling effect as the top sources of diarrhoeal disease resulting in widespread death and disease. It also impacts on other rights, including education and gender equality. Girls are less likely to attend school when there are no clean and safe sanitation facilities, widening the gap between boys and girls when it comes to ability to reach their full potential. Searching for a place to defecate makes women vulnerable to sexual violence and abuse and can increase social marginalisation. 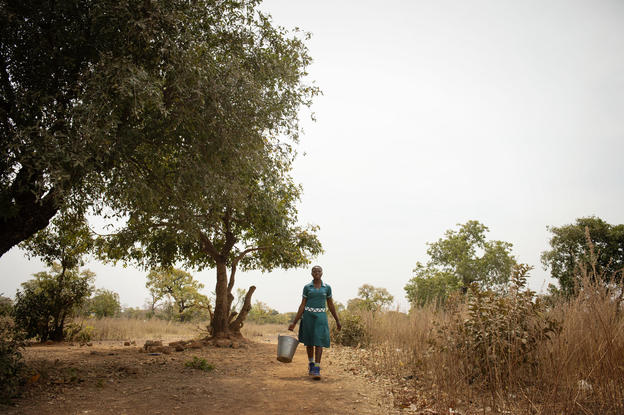 Gifty, 16, carries a bucket of water near her school in Akamo Community, Ghana. At Gifty's school there are no toilets, so students and teachers are forced to go outside. Boys and girls have to use the same place, braving snakes and dirty conditions. WaterAid/ Eliza Powell

The benefits of good sanitation are clear

The costs of open defecation and poor sanitation are on record: economic losses from poor sanitation and inadequate water supply are equivalent to 0.5% to 3.2% of gross domestic product (GDP) between regions, or 1.3% globally. There is a clear understanding of the positive impact of improved sanitation, so nothing should keep our leaders from making sanitation a priority and putting our money where our mouth – or should we say promises – has been for decades.

During the men’s football World Cup, thousands of West African football fans have gathered in fan zones, bars, restaurants and neighbourhoods to celebrate and support their teams. As these fans cheer their teams on, the sad reality is that many of them are without access to decent toilets. As many of these fans watch their state authorities prioritise their national teams, these same authorities have reneged on their promise to improve access to decent toilets.

That’s why WaterAid West Africa launched a campaign at the start of the World Cup to show the public and decision makers that 256 million people vs 0 decent toilets is a score we will not accept. While governments have signed up to a set of Global Goals that guarantee access to clean water and decent toilets to change this, they are severely off track to meet these promises by their 2030 deadline. It’s time to change tactics.

Sanitation must be prioritised at country and local leadership levels for transformative change to happen. Progress in countries indicates that concerted efforts for sanitation at all government levels is key to unlock change. Sanitation should be included in national development plans for increased visibility and political commitment.

Where they exist, sanitation policies have been unclear, contradictory, fragmented or inaccessible. The new African Sanitation Policy Guidelines (ASPGs) are a great opportunity to strengthen policies using the ASPGs to review, revise or develop sanitation policies and strategies for their implementation.

Women’s involvement in decision making about sanitation is critical. Decision makers should promote and increase women’s participation in sanitation policy making, decision-making processes and governance to ensure the needs of women and young girls are accounted for.

In West Africa, it is important that governments invest in information systems that can generate and disaggregate data by gender, geographic location and socio-economic characteristics to address discrimination and marginalisation in sanitation service provision.

Reaching sanitation for all by 2030 is possible

With the clock ticking towards 2030, we need more efforts, more action and focused prioritisation from West African governments to ensure safe, sustainable sanitation in West Africa for all. It is possible!

Join our team to #ChangeTheScore on decent toilets for everyone in West Africa.

Top image: Dondoungou Hanadoun, 46, lives in the village of Kongolekan in the commune of Koumbia. With no latrine in the family compound, Dondoungou, who has physical disabilities, used to have to travel on her motorised tricycle across a major road and dangerous terrain to find a place to go in the bushes. “It was dangerous and difficult to cross the main road...but I had no choice. To relieve myself next to my house without a place to hide from people's eyes was shameful.” Now, she has a toilet next to her house and designed for her needs.