Posted by
Jane Wilbur
on
28 May 2019
in
Menstrual hygiene Equality, inclusion and human rights Technology and innovation
WaterAid/Shruti Shrestha

Our project to improve people with intellectual impairments’ menstrual hygiene management achieved more than we could have hoped. Now it’s time to test at a wider scale.

For the past two years I have been leading the Bishesta campaign – a menstrual hygiene management behaviour change project with ten people who have intellectual impairments and their carers in Nepal. We have just completed an evaluation – here’s what we learned, and what has changed for the young people and those supporting them.

I spoke to all the carers we had worked with. I wasn’t able to interview the young people directly, so instead I watched how they responded to the contents of the Period Packs. I also interviewed the facilitators who delivered the campaign, and WaterAid staff in Nepal and the UK who had been involved.

What I heard was humbling, exciting and unexpected.

More of the young people now use a menstrual product, and all of them know where to get a clean one. None of them have shown their menstrual blood in public since the start of the campaign, and most are using pain relief for menstrual cramps. Carers are responding more compassionately when the young person is upset before and during menstruation than previously.

This was a marked difference from the situation before the intervention. It suggests that young people are now better able to manage their periods with greater independence. These are top-level changes, but you can begin to understand the what these mean when you delve deeper.

The campaign had wider positive effects

1. The young people and their carers identified strongly with the characters we created as role models.

The large Bishesta doll, used in the group training sessions to help the young people understand menstruation and how to manage it, was really effective, as were the visual stories. The young people aspired to be like Bishesta, and the carers learned from the behaviour of Perana – Bishesta’s carer in the stories. After the group training, many young people practised changing Bishesta’s menstrual product at home using the small Bishesta doll. When they menstruated, they did the same.

Most of the young people are now using menstrual products and disposing of them hygienically, which has made a remarkable difference to how the carers perceive them. One carer explained how a mother’s view of her daughter had changed because of this:

“Her parents told me that she did not do anything bad, they felt that she behaved like a grown up when she was taking care of the menstrual materials.” (Professional carer).

Another carer, who used to restrict the young woman’s movements during menstruation because she did not wear a menstrual product so she could show her menstrual blood in public, now goes out on the bus with her because she now wears one.

“I didn't used to take her when I went somewhere. Because if she menstruates when we are out somewhere, like in a bus, she didn't put on the pads, then I would be in trouble. Now, we have dustbin, storage bag, shoulder bag. There have been many changes.” (Family carer).

3. Providing practical support for periods had wide-reaching effects on the young people’s confidence and self-esteem.

There was one young person I had met twice before. When I saw her again, during the evaluation, I was shocked. Previously, she wouldn’t engage with me at all. She had looked down and turned her back when I tried to interact with her. Her carer had told me that she stayed in her bedroom while menstruating and did not wear a menstrual product. But the last time I met her, she walked up to me, held eye contact, greeted me with a smile and “Namaste”. I was blown away! Her increased confidence was palpable.

She, and most of the other young people, had benefited immensely from going to the group training sessions, meeting new people and having the facilitators talk to them directly instead of through their carers. The young people’s opinions mattered. The Period Packs were theirs. They owned them. They used them. They were proud.

Many carers said that the young people’s ability to manage menstruation more independently has increased their comfort, confidence and autonomy during menstruation. 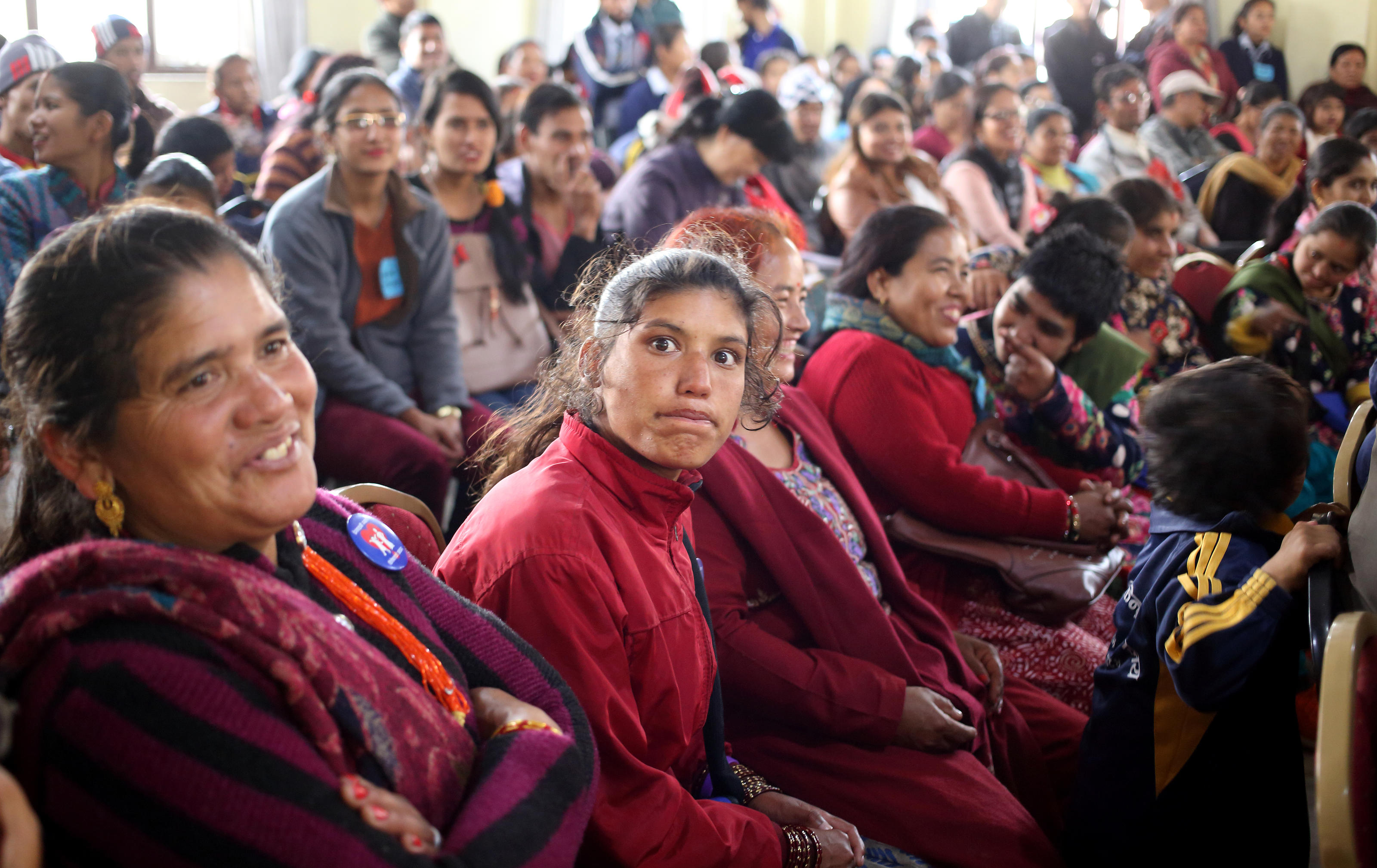 WaterAid/Shruti Shrestha
Kanchhi and her daughter Meena attend an event to mark International Day of Persons with Disabilities.

4. Carers and young people are talking more openly about menstruation.

Another young person stands out in my mind. I first met her before the intervention. When I had said the word ‘menstruation’ to her, she would hide her face in her hands, look down and cuddle her carer. Now she is open; she and her carer talk about it. She no longer sits in a corner not moving when she is menstruating, but wears a menstrual product and is more comfortable.

5. Carers and facilitators appreciated the skills and knowledge they had gained.

I was struck by how much carers took away from the campaign. Many said that they had learnt a lot about menstruation and how to support someone else’s menstrual cycle. Part of this is a better understanding of, and responding sensitively to changes in the young person’s behaviour before and during menstruation. One carer told me:

“Before, I used to get irritated when they got angry or upset during menstruation. I used to scold them, I thought they are not obeying me and creating problems for me... But now after the training, I have realised that this is natural, getting angry and upset is natural.” (Professional carer).

The facilitators enjoyed delivering the campaign. They felt it was filling a gap in their support to carers of people with intellectual impairments.

“One of the biggest problems, when they have menstruation, some of the families they tie up the girls at home, because the girl is running here and there. At that time, we didn't have any ideas of these type of trainings.” (Facilitator).

Now they have effective tools to help them respond.

The evaluation shows that the Bishesta campaign has been effective with this small group of people. Now, it needs to be tested at a wider scale, to see whether it can work in different settings and if the behaviour change can be sustained.

We are all committed to ‘leave no one behind’ as we push to make sure everyone is able to manage their periods with safety and dignity. Taking the Bishesta campaign forward could mean we can make real steps towards achieving this with one of the groups most vulnerable to exclusion from menstrual hygiene management interventions.

Jane Wilbur is a Research Fellow at the London School of Hygiene and Tropical Medicine, focusing on researching topics related to disability, water, sanitation and hygiene, including menstrual hygiene management and incontinence.

This is the third in a series of blogs about our groundbreaking hygiene behaviour change project for menstrual hygiene management in Nepal. Read the first blog, on the findings from the formative research, and the second, about how the intervention was developed.

How improving hygiene in West Africa will protect against Ebola, COVID-19 and other health crises

Water, sanitation and hygiene in public places must be improved to support economic development