Eliminating blinding trachoma by focusing on WASH and gender

Trachoma is the most common cause of preventable blindness, damaging the lives of millions of the world’s poorest people. James Kiyimba of WaterAid Uganda looks at how the disease disproportionately affects women, and WaterAid’s role in the race to eliminate trachoma by 2020.

Leading cause of preventable blindness

Trachoma, a neglected tropical disease, is the leading cause of preventable blindness worldwide.

It is an infectious eye disease caused by the bacterium Chlamydia trachomatis. Repeated infections cause scar tissue to develop inside the eyelid, which turns the eyelid inwards, leading to eyelashes scratching the cornea. This causes pain, discomfort, and permanent damage to the cornea.

Trachoma is associated with poor socio-economic conditions – places where safe water is scarce, and personal hygiene and environmental sanitation are poor. Eye-seeking flies and contaminated hands or cloths transmit the bacteria between people from the nasal or ocular discharge of infected individuals.

Eye-seeking flies often breed in human faeces, and sometimes animal dung. In places with poor sanitation, where faeces are in the open environment, these flies are more likely to breed and so to spread the disease. Poor personal hygiene – especially hand and face washing – make transmission more likely and treatment more difficult.

According to the World Health Organization (WHO), trachoma is responsible for the visual impairment of about 1.9 million people, and more than 200 million people live in trachoma-endemic areas. It is endemic in 39 of Uganda’s 112 districts, and the Ugandan Ministry of Health estimates that more than 10 million people are at risk of developing the disease.

Trachoma-endemic countries, including Uganda, have committed to eliminate trachoma by a 2020 target set by WHO, through accelerating the implementation of WHO’s ‘SAFE’ strategy. SAFE requires: surgery to treat the blinding stage of the disease; massive administration of antibiotics to clear infection; facial cleanliness; and environmental improvement. Eliminating trachoma requires improved access to safe water, sanitation and hygiene (WASH), and inclusive, community-based interventions that deliberately reach out to women and girls with health promotion. 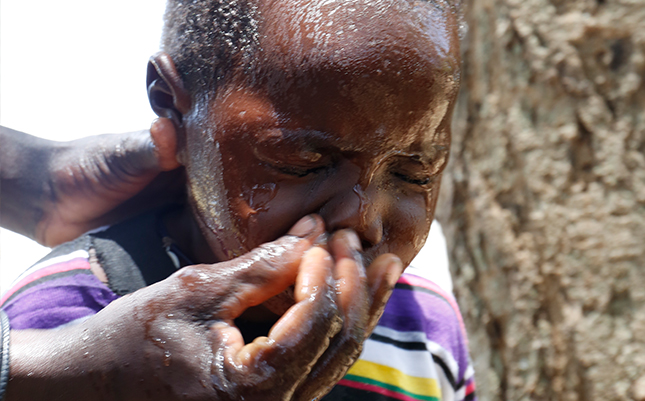 Gender and transmission: why women and children?

If you visit any trachoma-endemic community, you will easily notice that the disease primarily affects impoverished people, and mainly women and children.

In most rural African communities greatly affected by trachoma, gender roles put women at the centre of suffering from it. Women are in charge of garden work, collecting water and firewood, cooking, and caring for children, who often harbour the bacteria that cause trachoma. Since flies are more common around the home, women and children are exposed to infection more frequently than are men, whose responsibilities are usually outside the home.

Recently, I visited the village of Lopeduru-Adengei, in Karamoja region in northeastern Uganda, where WaterAid is starting work to support communities to improve their access to safe WASH. I witnessed how gender-specific household tasks place women at increased risk of trachoma infection.

I met Itai Nakoru, 87, who is visually impaired because of trachoma. Speaking with her gave a clear indication that most people affected by trachoma do not know how the disease spreads or how it can be managed.

“For the last six years, my eyes have been itching so much, this year, my left eye has totally lost sight. All my sight problems started the day my husband slapped me in the face,” she said.

Aleper Alice, 86, who also lives in the village, believes that her own loss of sight is due to witchcraft by a co-wife.

When a woman contracts the disease her family’s wellbeing is also affected. As trachoma progresses in a woman’s eyes, her children, of whom she is usually the main caregiver, tend to catch the infection. When the disease eventually leads to impairment and blindness, her daughters often miss school to care for her and take up her household chores.

This is why trachoma disproportionately affects women and sets young girls, the next generation of women, on a path of perpetual poverty.

Although we have a strategy for trachoma management and elimination, it has not yet been enough. It cannot be business as usual if we want to accelerate efforts and eliminate trachoma by 2020.

While the SAFE strategy is good for trachoma management and elimination, if implemented from a gender perspective, it can be even more effective.

In Uganda, WaterAid is responsible for implementation of facial cleanliness and environmental improvement for trachoma prevention in the Karamoja region. Women and children ought to be targeted in particular because they are usually the custodians of personal hygiene and environmental sanitation in homes.

One key lesson from our work is that efforts toward elimination of trachoma must address the gender barriers that both put women at greater risk of getting trachoma and make them less likely to get treatment.

In most trachoma-endemic rural communities, health centres are usually far away. Women and girls in particular face numerous barriers to walking long distances to have the much-needed surgery. Women need to ensure someone will care for the children, cook food, and even look for water. After surgery, they will need someone to escort them back home.

Because of this big opportunity cost, many women fail to access health services. When we encourage people with trachoma to go for surgery, it is important to note that women need social support to access medical care. Men should therefore be taught how best to support their wives or daughters while they seek medical attention.

In mass administration of antibiotics, children (the main reservoirs of trachoma infection) and women (their caregivers) should be targeted because they are always at increased risk of multiple infections. Both men and women must be educated, and given adequate information about how they can support each other to adopt healthy behaviours.

Ending trachoma requires communities to have easy access to safe water and for faces and homesteads to be kept clean.

Beyond trachoma, the WASH benefits resulting from this programme are likely to bring many other positive effects for the community – improving health issues such as diarrhoeal diseases and undernutrition, and the welfare and opportunities of women and girls.

As my conversations with the residents of Lopeduru-Adengei showed, misconceptions about the cause of trachoma are a challenge to elimination efforts. To achieve elimination, people need to understand why hygiene and sanitation are important to prevention and treatment. Incorporating consideration of gender to implementation of the SAFE strategy would make a big difference. WaterAid joined the trachoma elimination programme in Uganda to contribute both to better environmental conditions and improved behaviours that can sustain the impact of efforts.

If WHO’s goal of eliminating blinding trachoma by 2020 is to be reached and sustained for good, we can no longer risk missing the targets that could make all the difference. We don’t have much time left.