How did Cambodia come up with answers to the debate around the s-word? James Dumpert and James Wicken, Learning and Documentation Manager and Country Director at WaterAid Cambodia, describe the five factors that brought about Cambodia’s guiding principles for rural sanitation.

Nine months to develop a three-page document. This may sound like a disproportionate amount of time, but, for policy development, it was breakneck speed. Moreover, we weren’t trying to address just any policy issue – we were trying to tackle one of the most controversial issues in rural sanitation. As someone at a recent conference said, “It’s safer to say ‘shit’ around here than it is to say ‘subsidy’".

Essentially, the debate boils down to two questions:

This debate was having very real consequences for the Cambodian rural sanitation sector. It was not uncommon to see one sanitation project being implemented with a strictly no-subsidy approach and another project fully subsidising sanitation for every household. There are even instances in which both types of projects were implemented in the same communities. Naturally, this situation caused confusion and mistrust between local development partners, the Government and communities.

The Cambodian WASH sector’s response to the debate came in 2016, in the form of The National Guiding Principles for Rural Household Sanitation. These principles detail a set of guiding rules on how Cambodian sanitation programmes should apply subsidies.

The Director of Rural Health Care within the Cambodian Ministry of Rural Development (MRD) endorsed them in December 2016. However, what we see as the most interesting part of the story are the factors that enabled the development of the principles:

1.    A mechanism to exercise sector will.

The ‘political will’ of government is commonly viewed as essential for projects’ success and long-term sustainability. ‘Sector will’ includes both the will of government officials and of development partners to work together.

In Cambodia, there is a cooperative spirit among development partners. To put this good will to work, in early 2016, MRD and WASH sector partners formed various technical working groups, including a Rural Sanitation and Hygiene (RuSH) group, to advance the WASH agenda. These working groups are a platform for government, civil society and private sector organisations to come together to address challenging sector-wide issues. WaterAid volunteered to co-chair the RuSH working group, along-side the MRD’s Director of Rural Health Care.

At the first RuSH group meeting, we as a group identified priority objectives. At the top of the list was to develop guidelines on rural sanitation subsidies – this became possible because all sector stakeholders saw subsidies as an issue worth working on together.

A month later, the RuSH working group met again to lay out the purpose and content of the guidelines. Given the contentiousness of the subsidies issue, we had to design the meeting carefully, or any hope of fostering a collaborative spirit and sector-wide support could be lost.

So, instead of starting from scratch, we asked international staff from WaterAid and Plan International to present an overview of global experience of sanitation subsidies and a review of sanitation subsidy programmes in Cambodia. This background information enabled the RuSH group to develop a common vocabulary and understanding of different subsidy approaches and the risks and challenges associated with them – most notably the concept of smart subsidies.

At the RuSH working group meeting, we began a participatory consultation process with sector partners to ensure active participation of WASH experts from Government, private sector, NGOs and development organisations – including but not limited to iDE, WaterSHED, SNV, World Bank and UNICEF – who provided invaluable knowledge resources. We continued to use those information sources from within the RuSH group, as well as the vast amount of learning from research studies and projects related to sanitation subsidies from across the world. 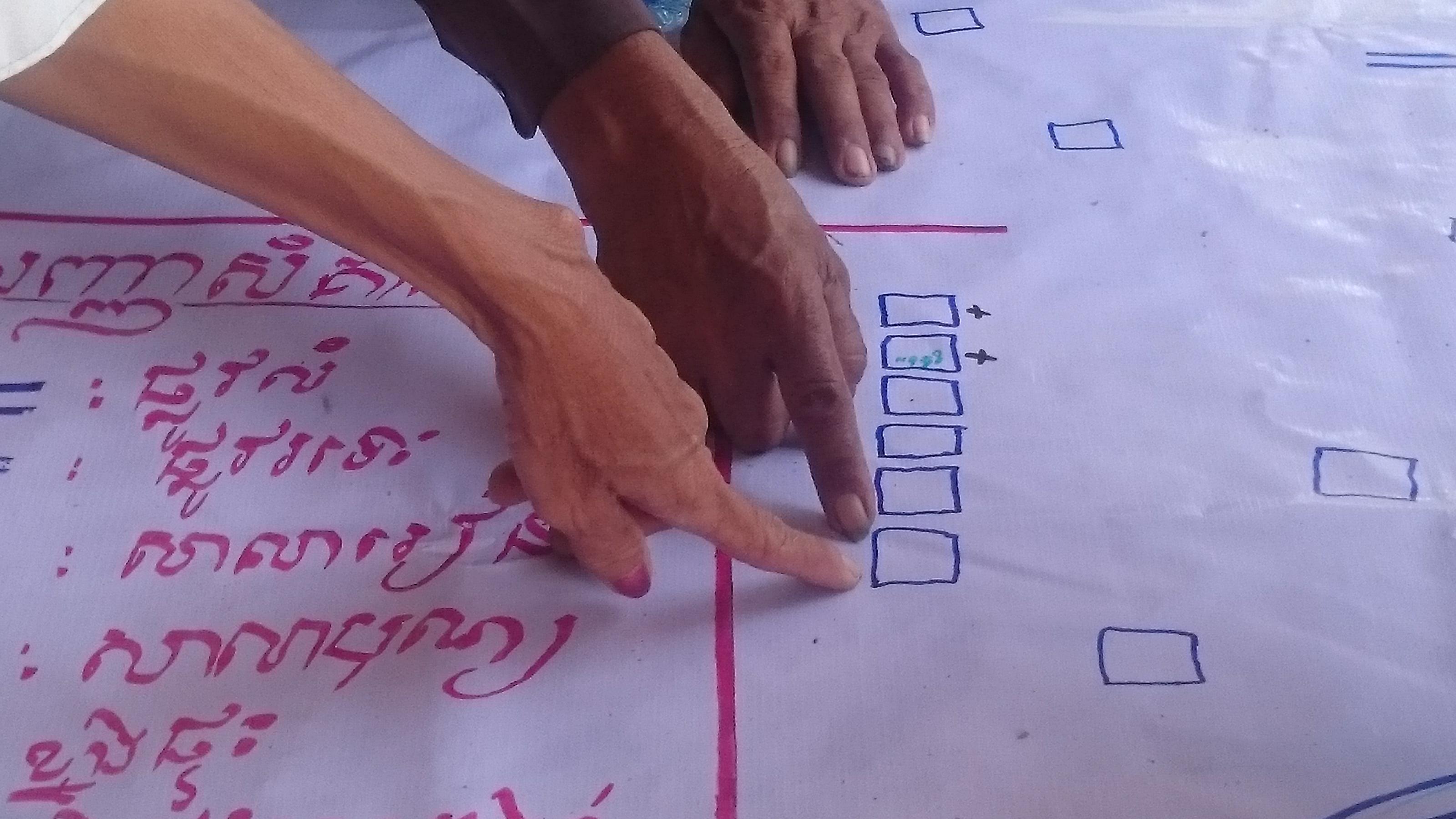 Two community leaders working on a community map indicating the location of poor households that do not have a toilet. Cambodia, 2017.
James Dumpert

3. A foundation of existing policies and programmes.

The successful adoption of the guiding principles can also be attributed to its clear links with Cambodia’s 2015 National Action Plan (NAP) for Rural Water Supply, Sanitation and Hygiene. Linking the guiding principles with the NAP made it easier for government and sector partners to throw their support behind it, because they saw it as a way to strengthen a plan in which they were already invested.

The successful implementation of the principles also relies greatly on the Ministry of Planning’s Identification of Poor Households Programme (ID-Poor). This establishes clear, standardised criteria for identifying the poorest households across the country. Although it is by no means perfect, without the ID-Poor Programme, implementation of social welfare programmes and policies at scale – such as national sanitation subsidies – would not be possible. Cambodia’s ID-Poor programme is an example of how the WASH sector can utilise and support complementary country systems to achieve its goals.

4. An iterative process led by an impartial partner.

We filled the months spent developing the guiding principles with setting up and conducting meetings, facilitating group discussions and writing countless emails seeking input. We did all of this to ensure the process of drafting, reviewing and revising the principles was as participatory and inclusive as possible.

Periodically, we met with key sector partners in small groups, afterwards presenting an updated draft to the entire RuSH working group. These presentations, intended to take one hour, would often become three or even four hours of lively but healthy debate.

Throughout this process, it was important for us, as co-chair, to remain as impartial as possible. We presented only facts and options based on evidence (not opinions), actively listened to what RuSH members had to say, and supported the MRD chairperson to keep the meeting discussions moving towards decisions. 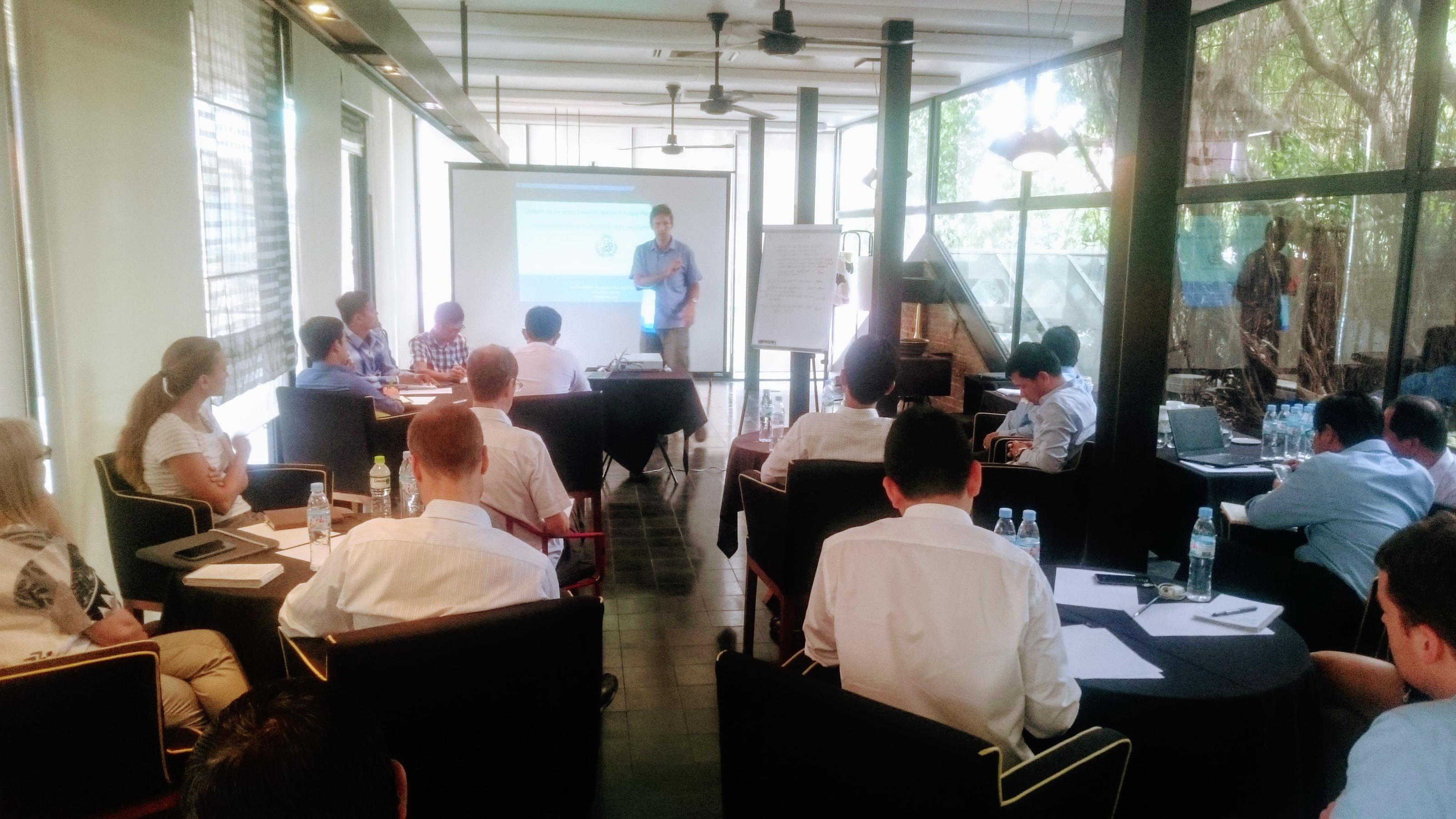 5. A capable and resourced organisation to facilitate.

True collaboration doesn’t happen by itself. It takes a lot of hard work and a dedicated and capable team to bring stakeholders together, facilitate a participatory and informed process, drive the initiative past the finish line and then monitor the outcomes to inform future adaptation. In some circles, this type of organisation is referred to as the ‘backbone organisation’. For the development of the guiding principles, WaterAid played this backbone role.

The ongoing challenge of investment

Thanks to these five factors, the development of the principles has become a positive example of how collaboration can help address even the most controversial issues.

However, a year after endorsement of the principles, several challenges have emerged that limit the Cambodian WASH sector’s ability to build from or even duplicate the experience.

These relate to a lack of long-term investment in the resources to drive forward the WASH sector’s agenda. As a case in point, during the year that we (WaterAid) served as the backbone team for the RuSH group the guiding principles were completed; however, nearly all of the other RuSH priority objectives identified at the beginning of that year were left undone. We simply did not have enough resources to carry forward the other initiatives as well, and relying on staff from other organisations, including the Government, to pick up the mantel pro-bono, in addition to their existing workload, was unrealistic.

For Cambodia, and indeed the world, to achieve and sustain the Sustainable Development Goals will take a collaborative and unified effort. With that comes a greater need for investment in strengthening sector collaboration – from global all the way down to sub-national levels.