Posted by
Louisa Gosling
on
14 December 2016
in
Monitoring, accountability and governance Equality, inclusion and human rights

Louisa Gosling, WaterAid’s Quality Programmes Manager, introduces a guide to using the status of water and sanitation as human rights to drive progress on the ground, and explains how marketing strategies can help us reach our target audiences.

The UN officially recognised the human rights to safe drinking water and sanitation in 2010. But what does this actually mean for work on the ground?

For people living in rich countries, where heavily regulated utilities supply the population with water and collect and treat wastewater, rights to water and sanitation are mainly covered by enforceable domestic laws and regulations.

But for people living in countries with very poor access to water and sanitation services, it is a different picture. For the nearly 2.4 billion people without access to adequate sanitation, and 663 million without access to clean water, these systems are often not in place. The lack of access is due to lack of capacity and resources in the sector, weak demand by service users, and poor accountability of service providers to users – their rights are neither demanded nor fulfilled.

The human rights framework clearly assigns responsibilities – people have the rights to water and sanitation services, and governments are duty bound to realise them. But what does that mean in practical terms for government, especially local government officials, who are closest to the people? How can the human rights actually help local officials to reach everyone, even when they have very limited resources and capacities?

The UN Special Rapporteur’s handbook on realising the human rights to water and sanitation sets out the practical implications in considerable detail, which is helpful. But it is too long and detailed for many practitioners to use. So, WaterAid, WASH United, End Water Poverty, University of Technology Sydney, UNICEF, and the Rural Water Supply Network joined forces to develop guidance specifically aimed at local government officials. We worked with a content marketing agency, C3, to help make a really user-friendly guide. 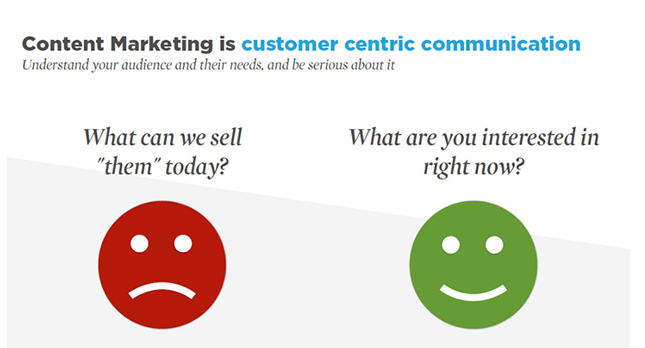 Image 1: Finding out what the user wants to know.

To find out more about our target audience the ‘Making Rights Real’ project partners, funded by players of the People’s Postcode Lottery, carried out an audience analysis. First, we interviewed local government officials in low-income settings to learn what they thought about their responsibilities for reaching everyone everywhere with water and sanitation. We wanted to know what helps them, what makes their work difficult, and what can help to inspire them. We presented the resulting paper – ‘Achieving universal and equitable access to water, sanitation and hygiene (WASH) for all – practitioner perspectives and perceptions [191]’* at the Rural Water Supply Network forum in Abidjan. 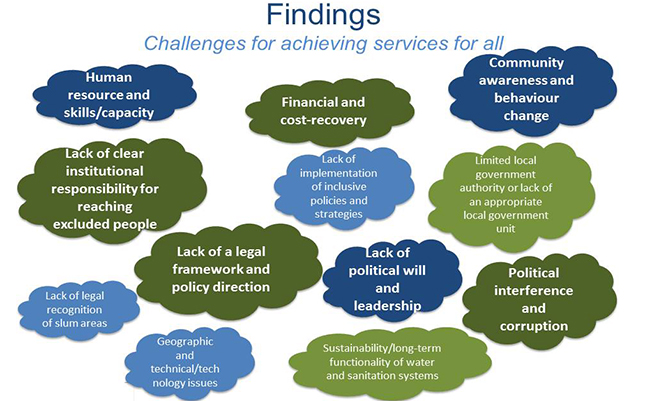 Image 2: Some of the challenges local government officials face, according to audience analysis.

The report clearly showed the many challenges that local government officials face, and their low understanding of human rights as something relevant to their work.

So, working with C3, we used these interviews to develop user ‘personas’ to help us better target the content of human rights to our audience.

We decided to target our materials towards the would-be heroes. The analysis defined this audience segment as a large group of people working in local government, who feel personally committed to providing services to local people but are constrained and thwarted by lack of resources and political support.

We agreed that if this group were empowered and supported some of them could become superheroes and really help progress. Champions within institutions can have a huge impact. For example, the WaterAid-commissioned research ‘A tale of clean cities’ found that one of the main drivers for improving urban sanitation was committed champions at the municipal level.

The would-be heroes have many misconceptions about human rights. For example, they often believe that if water is a human right it should be provided to everyone free of charge, which is clearly incompatible with governments needing to raise revenue to help run sustainable services. However, the human rights standards state that it is fine to ask people to pay for services, as long as the tariffs are affordable.

We also discovered the many different groups that influence the would-be heroes’ actions and decisions (see image 4). We learned how important it is to recognise these influencers, to galvanise as much support, advocacy, and collaboration as possible from them in order to achieve adequate and sustainable services for all. 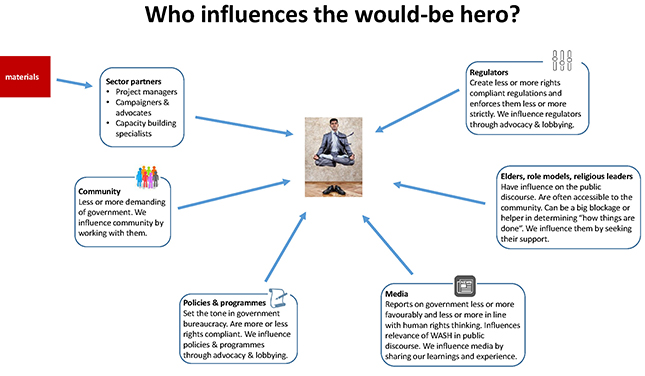 We wanted to create a guide to help support and nurture sector champions. To clarify to local government officials the usefulness of human rights thinking, we used the analysis to design a colourful three-piece guide – ‘Making Rights Real’. The idea is for sector partners (like WaterAid) to use the materials in conversations with government partners.

The guide comprises: the pocket guide, containing basic thoughts and principles; the manual, with each step explained; and the journey, which shows the process at a glance.

You can download the guide (currently in English, French, and Portuguese) and instructions, from the Rights to Water and Sanitation website, and use them in your working relationships with governments.

Rights at the RWSN Forum

We launched the materials at the Rural Water Supply Network Forum (RWSN) in Cote d’Ivoire, using presentations, discussions, and role play. The response from participants was very promising. There is a strong desire among people in the sector to know more about human rights and how they can use them to clarify responsibilities of governments, communities, service providers, and service users, and make everyone more accountable to provide adequate and sustainable services for all.

If we are to reach everyone everywhere with access to water and sanitation by 2030, as promised in the UN Sustainable Development Goals, a change in approach is needed. These essential human rights can only be delivered if those with the duty to deliver them are empowered and inspired to do so.

Louisa Gosling is Quality Programmes Manager at WaterAid. She tweets as @louisagosling1>