Early tests show that eWATERpay has up to trebled revenue from water points and cut waiting times from three hours to ten minutes in Tanzanian villages. Priya Sippy and Abel Dugange, WaterAid Tanzania's Communications and Strategic Engagement Manager and Director of Programmes, explain how a tag just the size of a 10p coin could change the game for rural water supply.

Why do communities need a new way to pay?

Sustainability is among the key challenges in Tanzania’s water sector, especially in rural settings, which are often very remote. Despite significant investment over the past 15 years in creating new infrastructure, the latest routine monitoring data from the Ministry of Water and Irrigation (MoWI) show that an estimated 35% of water points in rural areas are not functional. 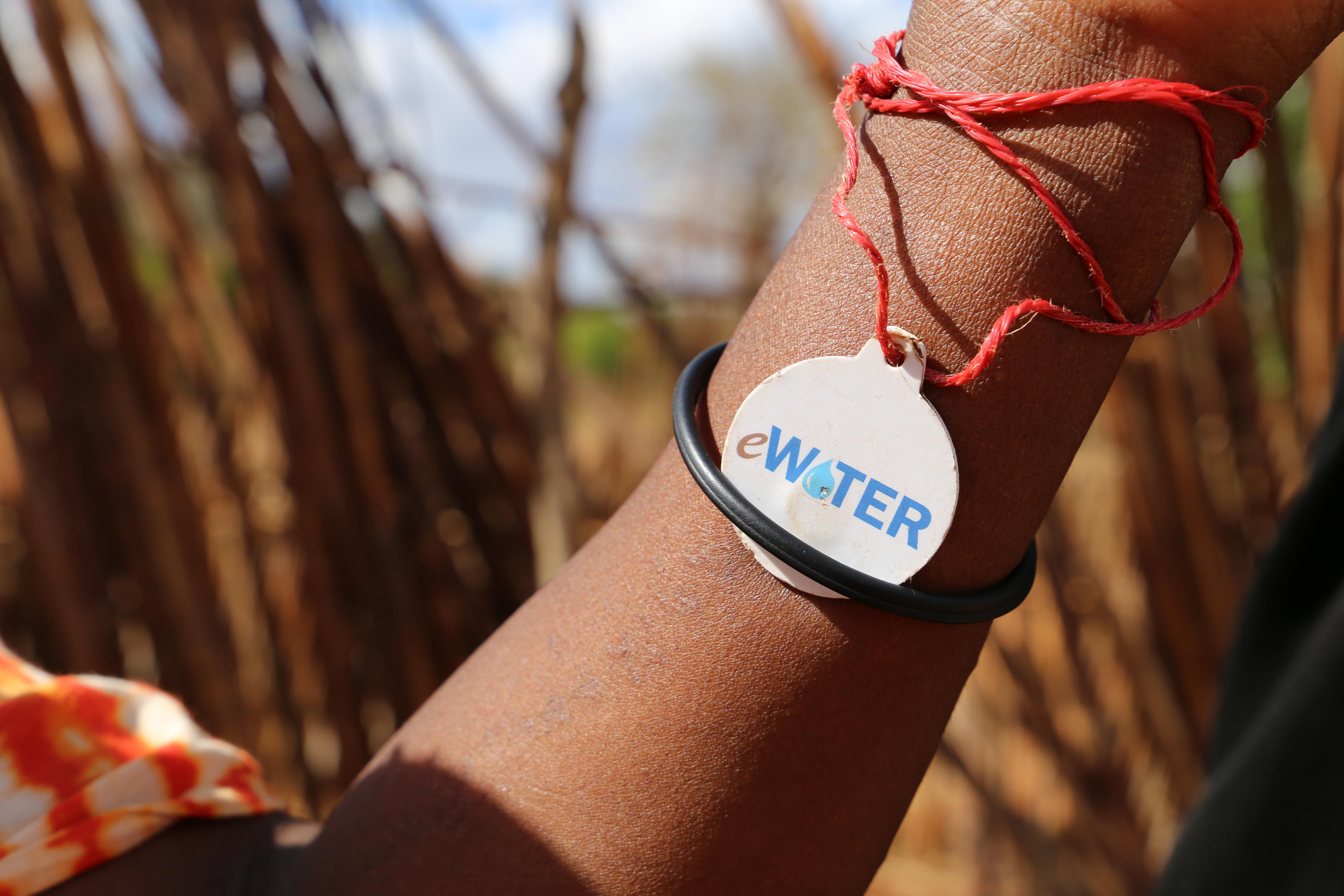 An eWATERtag worn on the wrist.
Priya Sippy

In 2014, WaterAid Tanzania started a project in several villages in Babati, Manyara region, in collaboration with Babati District Council. In 2017, we joined with tech startup eWATERpay to pilot an electronic payment system for rural water supply schemes that aims to improve sustainability of services. Our project aimed to provide clean water to the communities in the villages of Endanchan, Bashnet and Gidewar.

Before we began the project, the community owned water supply organisation (COWSO) had assigned water vendors to each of the 11 distribution points in Endanchan village and the ten in Gidewar village. The vendors were only available for, at most, five hours a day because they also had other responsibilities. Community members were therefore limited on when they could access water, and often had to wait for long periods for the vendors to arrive.

Water wastage was also a big problem. Community members paid 25 Tshs for one 20L bucket, equivalent to a few (US) cents; however, people often used several litres of water to wash their buckets before use, which they didn’t pay for. Similarly, because people were not paying for every drop, buckets would overflow and people would leave the taps running – wasting both water and money.

Community members paid for water cash-in-hand to the vendors, who in turn gave the money to the COWSO treasurer. However, there was no accountability mechanism in place, so it was very easy to lose money along the chain.

The treasurer of the COWSO in Endanachan village told us that, because of these challenges, the amount of water used and the amount of money collected at the meters did not match up – a lot of money was being lost. This left less for operation and maintenance, and on several occasions repairs could not be completed due to lack of funds. This compromised the sustainability of the system and services.

These challenges are common across many rural areas in Tanzania.

How does the electronic water payment system work?

The eWATERpay system is a cheap, simple technology that uses mobile money, near field communication and the Internet of Things cloud server monitoring. Users can purchase credit through several methods, including using the eWATERapp on smartphones, purchasing through mobile money or receiving a remote gift via PayPal. The credit loads onto their eWATERtag, and eWATERtaps installed at distribution points dispense water and take credit when the user presents the token.

A woman holds her eWATERtag to the distribution point reader as it dispenses water.
Priya Sippy

The eWATERpay system has helped to solve several challenges. First, water is now available 24/7, which has reduced queues at the tap, and means community members are now free to get water whenever they want. Research by eWATERpay in Gidewari village shows that the average time spent collecting water has reduced from three hours to just ten minutes.

Additionally, every drop of water is paid and accounted for, as water is only dispensed once a user presents an eWATERtag at the tap. The money goes directly into an online bank account, and the ‘Essential management model’ means 80% of revenue from water user fees goes to the COWSO to use for operation and maintenance, ensuring the water points keep working.

The taps are connected to the internet, so live data (such as flow rates and tap use) can be captured and the status of the taps monitored remotely. Any issues affecting the functionality of the water points can therefore be detected and addressed immediately. This also saves the COWSO time spent visiting each water point to record its status and travelling to the bank to deposit the monthly collection. The data can also help the district make informed decisions about further investments in water services.

A smartphone screen showing the different water points across Endanchan Village. eWATERpay shows the status of each water point so the engineers can detect any problems quickly.
Priya Sippy

More than 4,000 of these tokens have been given to community members in Endanachan and Gidewar villages in Babati district, Manyara region.

eWATERpay has changed the game for people here. Before, the revenue collection over a three-month period in Endanchan was 1,125,425 Tshs. After installation of eWATERpay, the collection for the subsequent three months was 2,383,304 Tshs. In Gidewar Village the collection rose from 425,250 Tshs to 1,427,786 Tshs – a significant increase. With this extra revenue, the COWSO not only has enough money for operation and maintenance, but they are also planning to use the money to extend the water network to parts of the village that are a bit far from the water points.

WaterAid Tanzania, Arusha District Council, eWATERpay, Tumaini Jipya and Nelson Mandela University Institute of Science and Technology have now joined hands to implement a similar project across five villages in Arusha, with funding from the UK Department for International Development. Over the next year, we plan to continue to engage with the Ministry of Water, aiming to integrate eWATER into Government project funding schemes and the Water Point Mapping system.

Although we are still testing the technology, the results so far are promising. This small token may be a big way to contribute to ensuring more sustainable water systems – helping us reach everyone, everywhere, by 2030, for good.

eWATERpay in action in Babati! an innovation to improve sustainability of rural #WASH services through accountable collection of user fees pic.twitter.com/IlJNPmfVuk