In 2015, James Wicken, Country Director for WaterAid Cambodia, introduced us to HandyPods – the novel floating toilet technology that WaterAid partner Wetlands Work! was pioneering in lake-dwelling communities in Cambodia. Two years on, James and Irina Chakraborty from Wetlands Work! recalls the challenges the project presented, and the innovative solutions they inspired.

What do you do with a floating toilet when there’s no longer any water for it to float on? This is just one of the challenges WaterAid’s partner Wetlands Work! faced last year as they introduced the HandyPod to communities on Cambodia’s Tonle Sap lake. Introducing a new product and new behaviours to vulnerable communities during a period of extreme change in the local environment made for a rollercoaster year.

An abnormal year, and the new normal

As the 2015 dry season continued, the floating communities faced two unprecedented challenges. Floating households that had never been land-bound before had no choice but to pull their dwellings onto the shoreline as tributary water levels dropped to record lows. The water levels in the lake were also the lowest on record, likely to be from a combination of the El Nino drought effect and numerous dams on the Mekong north of Cambodia that affect river flows into the lake.

The second challenge was that following several dry years fish catches were also at record lows, which, as fishing is the primary source of income for the lake villagers, in turn meant record low incomes for most households.

These challenges affected the introduction of the HandyPod. People were reluctant to spend their dwindling incomes on sanitation systems, and the design had to be modified to be ‘amphibious’ to cope with the dry conditions, rather than being targeted for dwellings expected to be permanently afloat.

Wetlands Work! designed and constructed a new prototype, which replaced the floating section of the system with a treatment system firmly attached to the dwelling. Such a system can float with the house, or work equally well on land as required.

The modifications eventually led to a more robust system with broader applicability. The new design has significantly longer life use, is stable in extreme storm events, is easier to build, requires minimal maintenance, and performs substantive wastewater treatment in both floating and dry land environments.

This week in Cambodia temperatures have jumped up again, and there is already news of water shortages and a new El Nino starting later in 2017. We can expect another year of low water on the lake, so the amphibious version of the HandyPods will be needed.

Building a supply chain for the HandyPods

One of the first challenges we encountered in this project was how to build a sustainable supply chain. The original idea was to train local builders to manufacture and install HandyPods. This turned out to be unfeasible when we figured out where a builder would have to go to gather all the components needed, and factored in the cost of transportation and time.

The solution was to partner with a social enterprise in Phnom Penh that can manufacture all the components, pack them inside the plastic drum that houses one of the treatment stages, and transport this up to the lake. A significant benefit of manufacturing the systems in a single location is that it ensures consistently high quality.

Additionally, with a single manufacturer the design can be easily adjusted without needing to reach out to a potentially large number of geographically dispersed manufacturers. 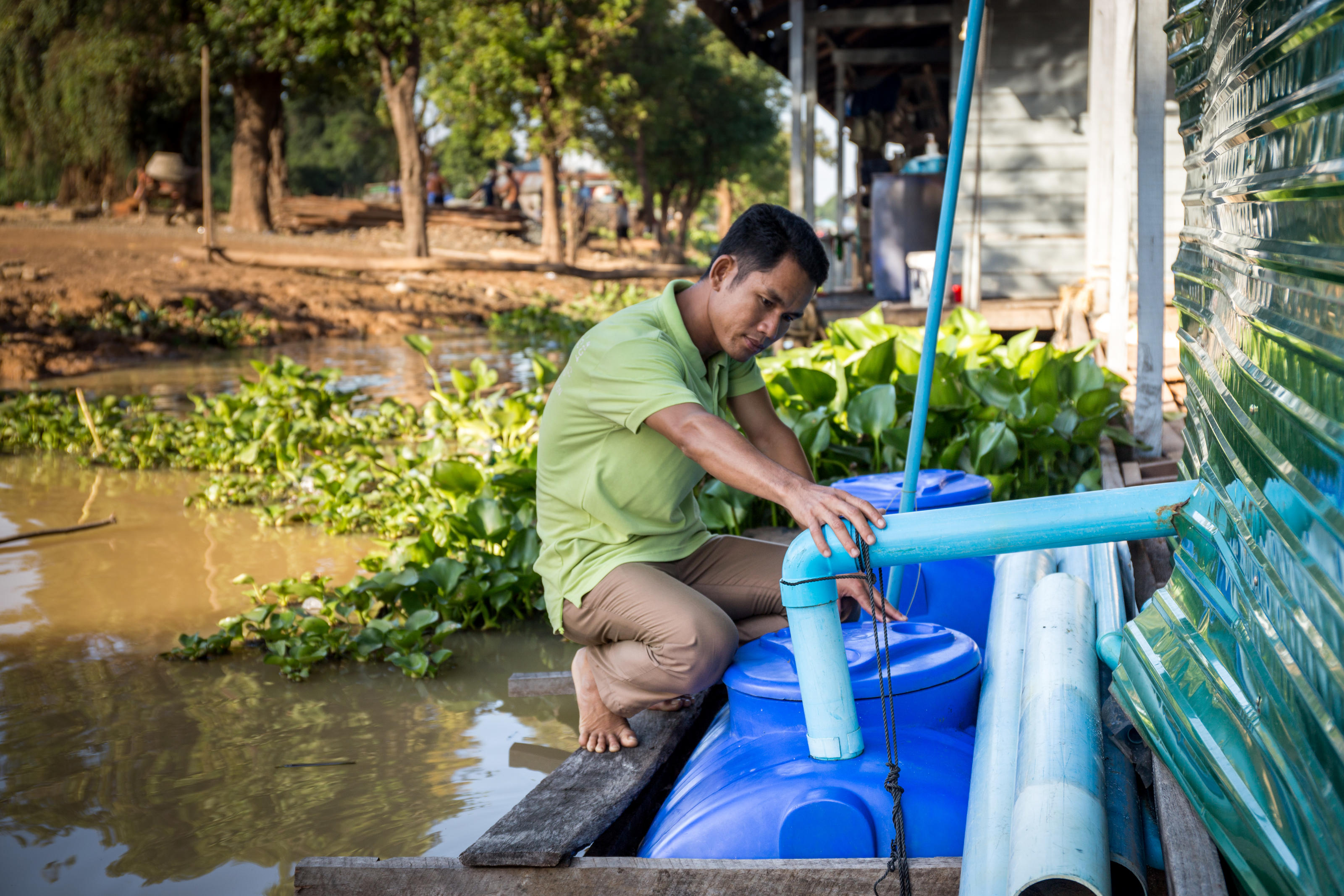 How do you get someone to want something they have never seen before?

Perhaps the greatest challenge the project faced last year was generating demand for a product that addresses a need (going to the toilet) normally taken care of for free (into the ambient water).

The Community-Led Total Sanitation approach is widely used in Cambodia to trigger behaviour change and encourage people to use a toilet. Wetlands Work! experimented with a major modification of this approach for floating communities – not easy when you need to do Community-led Total Sanitation (CLTS) transect walks by boat.

Wetlands Work! needed to try something else. A key challenge in creating demand for the HandyPod was that potential users had not seen or experienced the system before. Giving away free systems was not an option, since this carried a risk of positioning the HandyPod as a give-away product that users do not need to pay for – a significant issue for Cambodia in particular, where numerous NGOs focus on donating various goods for free. Additionally, donations to only a subset of households could be perceived as unfair, creating ill will in the community. And donating to the poorest households could result in better-off households being reluctant to purchase the product if it were seen as a sign of low status.

Roll up, roll up

Wetlands Work! instead devised a ‘sanitation raffle’ to create exposure to the HandyPods without giving away free systems. In each village several HandyPods were awarded as raffle prizes, positioning the product as the top prize in an array of sanitation and hygiene-related products, such as soap, toothpaste, towels, and small bathroom mirrors.

Wetlands Work! also built demand through a school-focused sanitation campaign in floating schools. They installed larger school-scale HandyPods and conducted teacher training sessions on sanitation and hygiene awareness at several schools, followed by in class student sessions. The sessions included informational materials for teachers, messages such as the importance of handwashing and clean drinking water, and how to properly use a toilet, as many of the children had never experienced using a squat pour-flush latrine.

The focus on children is key, as they bring messages of sanitation and hygiene back to their homes to share with their family. Now we are facing a new challenge in the schools – how to get a water source into or near to the toilets that children can use for handwashing.

Wetlands Work! are continuing to innovate and looking for support to scale up the HandyPod programme across the lake, through partnerships with savings groups, health centers, schools, and local businesses.