The HandyPod: sanitation for floating communities in Cambodia

Building safe and sustainable sanitation systems is a huge challenge for many poor communities, but when homes are built over water a new dimension is added. James Wicken, WaterAid Country Representative for Cambodia, looks at a new solution to the problem faced by Cambodia’s floating villages.

Today in Cambodia it’s stifling outside. It’s thundering, and everyone is hoping the monsoon rains will finally begin, bringing the rainy season and annual floods, which cause the rivers to swell, the Tonlé Sap river to go into reverse, and lakes and ponds to expand. Although much-needed, the rains and consequent floods will spread unmanaged human waste and create a disease risk. The homes of many people in rural areas and in cities, especially poorer settlements, may be inundated with water for months to come. And then there are those who live in floating houses along the rivers and on the lakes, including the Tonlé Sap Lake, the largest freshwater lake in Asia. 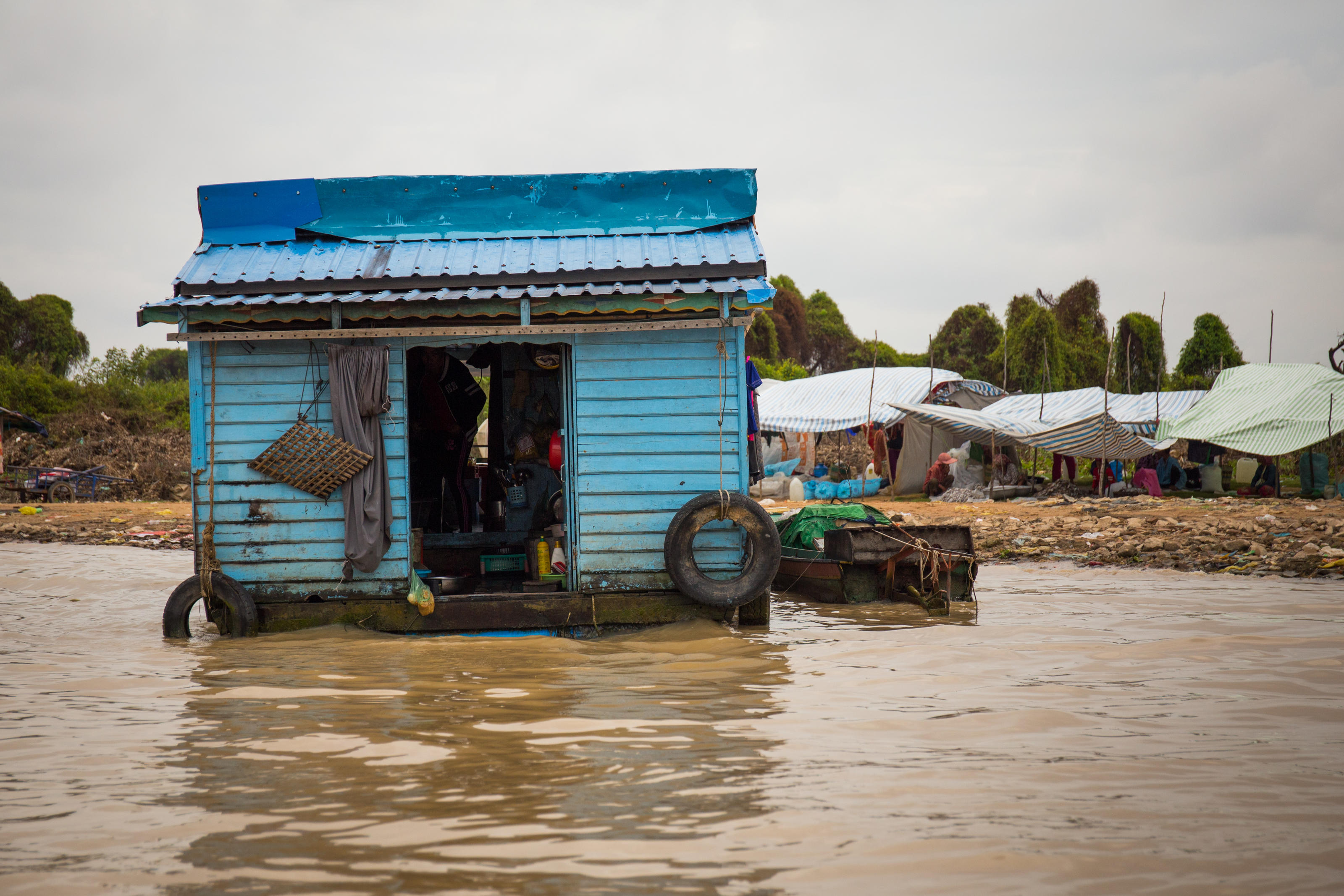 A challenging environment for sanitation

For Cambodia to reach the Government's target of universal access to sanitation by 2025, people living in these types of areas need sustainable solutions. In Cambodia, an estimated 25-45% of the population lives in ‘challenging environments’ such as floating villages. It is often the poorest people who can't afford to own land who live in such places, and these populations are expected to grow, especially in cities as poor people continue to migrate. Cambodia is not alone – these informal settlements are found in many countries, such as Myanmar, Malaysia, Nigeria and Indonesia.

Because of WaterAid’s focus on equity and inclusion, these populations came on to our radar in our first year of work in Cambodia. WaterAid is partnering with a social enterprise called Wetlands Work! to test one potential solution – called the HandyPod – on the Tonlé Sap lake.

When people living in the lake’s floating villages – who number well over 100,000 – need to go to the toilet, they take a boat to a secluded spot on the lake, go into the surrounding forest, or at night may squat off the side of their floating house. This same water around the houses is used to wash dishes and clothes. Young children swim in it.

The HandyPod took Wetlands Work! years to design, test and redesign. Resembling a floating garden, or a child's paddling pool with a garden in it, it contains a man-made wetland filled with water hyacinths.

In the system, a normal porcelain squat toilet on the back of a floating house connects to a drum where the anaerobic (oxygen-less) processes take place. From here, the waste passes through to the HandyPod floating nearby, where the roots of water hyacinths further break down the waste before it passes into the lake. Wetlands Work! regularly collects water samples in the area around the pods, to ensure the quality conforms to Cambodian standards.

Last year, WaterAid began partnering with Wetlands Work!, with funding from Grand Challenges Canada, to see whether the HandyPod can be scaled up using the market-based approachesproving so successful in land-based environments in Cambodia. This investigation involves work on the demand and supply sides.

On the demand side, one of the challenges is to persuade people to pay for a toilet, because to defecate into the lake is free. Among the methods to be tested are community-led total sanitation techniques, which again work well in Cambodia on land. On the supply side, the idea is for local businesses to sell HandyPods and offer an installation service. One of the key challenges here is the supply chain involved in getting all the materials needed to make the pods to these relatively remote locations.

The project in motion

After research into consumer behaviour and local businesses, the project is moving into the first phase of promotion and sales. Hopefully this will coincide with the end of the main fishing season, when people in the lake villages have enough money to invest in a toilet.

Meanwhile, in the capital Phnom Penh, the Ministry of Rural Development and organisations working on water, sanitation and hygiene (WASH) are busy preparing Cambodia's first ever National Action Plan on rural WASH – the plan for delivering universal access by 2025. WaterAid is actively involved in these discussions, and in making sure these 'challenging environments' are adequately addressed.

WaterAid is also a founder member of a new Sanitation in Challenging Environments initiative – a group of organisations that shares knowledge and experiences of potential sanitation solutions for marginalised populations. We hope our practical experiences on the lake will influence these national processes, so that solutions can be scaled up by the Government and the private sector to communities in challenging environments across the country.