Collaboration and innovation are two values core to WaterAid’s work, and we are frequently shown how key they are to our projects. Priya Sippy, Campaigns and Communications Manager at WaterAid Tanzania, shares frontline experience of partnership and adaptive planning in bringing water and sanitation to Kibondemaji in Dar es Salaam.

70% of Tanzania’s population is rural, but the demographic is rapidly changing. The country’s cities are seeing huge growth – it is expected that by 2030 over two thirds of the population will live in urban settings.

This unprecedented growth can overwhelm cities and lead to people living in unplanned settlements, which often lack access to water, sanitation and hygiene (WASH) facilities. In Dar es Salaam, for example, more than 70% of residents live in unplanned settlements1 with limited services for water, or for faecal sludge and solid waste management, increasing their risk of contracting waterborne diseases.

Since 2015, WaterAid Tanzania has been working with partners to bring these services to Kibondemaji, a ward in Temeke District, Dar es Salaam.

These settlements were not served by a water network, so people were paying excessive prices for water or using unsafe wells. Latrine pit-emptying services are limited, forcing people to manually empty their pits, which is unhygienic and dangerous – Kibondemaji was one of the areas worst affected by the cholera outbreak, with around seven new cases each month in 2015.

The complexities of working in urban unplanned settlements presented many challenges to the project. As a result, WaterAid learned key lessons around the importance of partnerships and adaptive planning.

During the project, WaterAid brought a number of key stakeholders on board – including Temeke Municipality Council, DAWASA (Dar es Salaam Water and Sewerage Authority), DAWASCO (Dar es Salaam Water and Sewerage Corporation), UTT microfinance, elected community leaders, People’s Development Forum (PDF) and sanitation businesses – to provide pro-poor WASH services. This range of partners was necessary because the project required acquisition of land, capital, community participation and technical expertise. We even needed to bring unexpected stakeholders on board, for example TANROAD (the Tanzania Roads Agency), because the water pipeline needed to be extended under the road.

The partnerships brought additional opportunities. For example, DAWASCO saw an opportunity to connect households to the water supply, reaching more people with water than initially planned – 600 households so far. We continued to work with DAWASCO, to negotiate pro-poor tariffs to ensure community members can pay for the water. The project has reduced the price of one unit of water from 5,000–6,000 Tanzanian shillings (Tzs) to 1,800 Tzs. 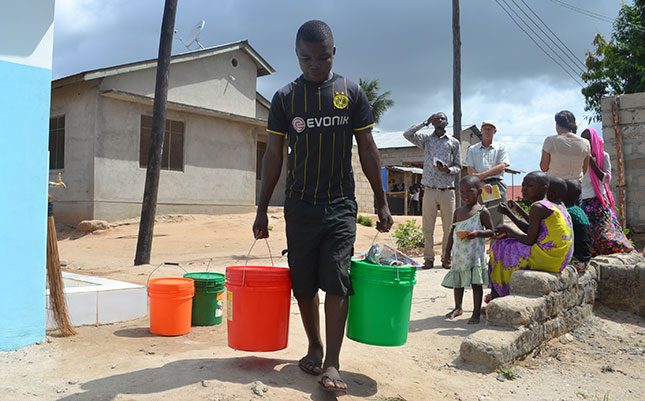 While the original project design did not include this many partners, challenges during project implementation showed us that to bring WASH to poor urban communities we needed the collaboration of all stakeholders. Historically Tanzania's agencies and authorities have tended to work in isolation, so by working with a wide range of stakeholders, even outside the WASH sector, we have demonstrated a new and innovative approach to providing WASH in urban settings.

The many challenges throughout the project made adaptive planning another key feature. Initially we planned to rehabilitate and drill boreholes to bring water to the ward. However, we found that the infrastructures were derelict, and water was highly saline and not safe for consumption. After consultation with our partners, we decided to work with DAWASCO to extend their network supply of piped water through rehabilitating water tanks and kiosks. Securing the water tanks was difficult, because landowners wanted compensation.

When extending the network, a further challenge arose – the pipe had to pass under a road. This required liaising with TANROAD to get the necessary permissions, which pushed the project timeline back by weeks. After much negotiation, they granted permission.

Another challenge was acquiring the land needed for the water kiosks and the solid and liquid waste transfer stations. Landlords asked for compensation to construct on their land, which was beyond the project budget. However, we partnered with DAWASA and worked with individual landowners, and have since secured land for the construction of the DEWATS (decentralised wastewater treatment system).

The many challenges have taught us that we need to be flexible with project design and contractual agreements, and ensure good communication between all partners so changes can be negotiated and agreed.

One of our highlights last year was working together with partners to bring clean and safe water to Kibondemaji, Temeke, Dar es Salaam #SDG6 pic.twitter.com/7MTLozu0iE

Despite the arrival of water, community management of the project is still being considered, especially the issue of financing, and we are working with our partners to discuss options. We will continue to strengthen and deepen the partnerships created from this project to leverage more resources for urban WASH.

We will communicate this work to the Government and the wider WASH sector, because it tackled some of the sector’s key challenges, such as non-revenue water, engagement of the private sector to address financial and technical challenges, and lack of knowledge around the pro-poor model. If scaled up, this model could help the Government achieve national targets for urban WASH as outlined in the Water Sector Development Programme.

We have recognised that urbanisation across the country will turn many villages into towns, and that councils will need to plan for this. We want to ensure WASH remains an integral part of town planning, so we are undertaking research in Babati, and working with the town council on how it can be successfully integrated. This research could help inform other areas undergoing urbanisation.

WASH in urban settings can be complex and challenging, and we are still learning the most effective ways to tackle it. The Kibondemaji project demonstrated that through strong and effective partnerships and adapting to challenges along the way we can reach the poorest urban communities with WASH.

Find out the latest news from WaterAid Tanzania @WaterAidTZ