The political economy of water rights: putting indigenous knowledge at the heart of WASH provision

Through a partnership with the School of Politics and International Studies at the University of Leeds, WaterAid has supported the dissertation and research of Phoebe Holmes, who completed a Masters in Global Development in 2020. Together with Advocacy Advisor Katie Tobin, Phoebe shares reflections on her research into the global political economy of water rights and its implications for climate change adaptation, and access to water, sanitation and hygiene.

The international water, sanitation and hygiene (WASH) sector aims to extend access to these three essential services to those who do not have them, primarily in low-income countries. The major players in this sector emphasise WASH as a solution – and a prerequisite – for development, for COVID-19 response and recovery, and for climate change resilience and adaptation. This is done by promoting community-driven systems strengthening, while reminding industrialised countries of their historical responsibility to provide aid and climate finance.

As WaterAid and the broader WASH sector engages more on climate change – including calling for additional climate finance and new commitments to locally-led adaptation – it is important to think about how we could contribute to alternative forms of governance, knowledge management, and organising, while putting local and indigenous knowledge at the heart of our work.

Through a partnership with the School of Politics and International Studies at the University of Leeds, and the process to develop its new global strategy, WaterAid has started to grapple with its position as a global north INGO within neo-colonial structures of power and influence. These considerations are even more urgent amid a renewed momentum to decolonise aid, brought about by the global Black Lives Matter movement.

Phoebe’s research encourages the WASH sector to examine the overarching political and economic models that determine access to water and sanitation, especially in relation to ‘vulnerable’ and marginalised communities in the global south. This analysis is essential to all our work, but is especially key in underpinning our calls for locally-led adaptation in our international climate advocacy.

External intervention by foreign actors in the water sector tend to promote privatised, marketised, and commodified approaches; depoliticising solutions to WASH issues in favour of scientific and technical approaches that overlook the political structures that helped create WASH inequality and injustice in the first place. These approaches are grounded in colonial histories and centuries-old dichotomies that mould dominant philosophical frameworks, such as land versus labour, and nature versus resources for human consumption.

The emergence of trade under merchant capitalism underpinned primitive capital accumulation. This is, essentially, the foundation of the current global economic system. Philosopher René Descartes’s dualisms between body and mind, and society and nature, were also critical in contributing to the claim that European civilisation should become “masters” and “possessors” of nature – an idea that still shapes the modern prioritisation of labour productivity over the upkeep of land and health of ecological systems. 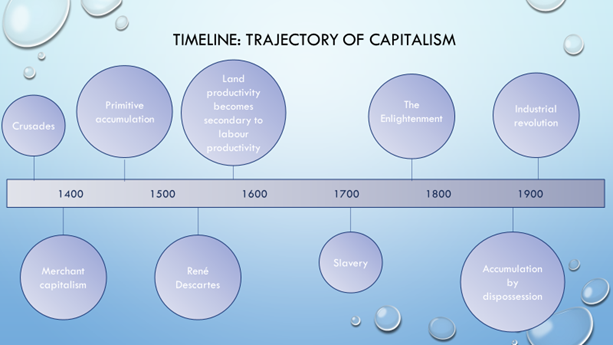 Today, this liberalist ideology is used in the water sector to justify external intervention. Capitalist climate-water solutions are based on formulae and assumptions that shape a one-dimensional model, which prioritises efficiency to bolster profits. Metering and rationing, and early warning systems, for example, are both prominent mechanisms of governing water allocation that are complicit with capitalist assumptions.

These approaches are often depicted as the only viable option, but they prioritise certain water uses over others, and establish an accepted set of norms. This then justifies action against “perpetrators” (i.e. communities operating in traditional ways) who do not conform to the water uses deemed legitimate by industrialised, economies-of-scale models. At the same time, large-scale corporate actors – the true polluters – are praised for their ability to generate economic value.

An urgent responsibility to prioritise indigenous and local knowledge

In the face of climate uncertainty, these approaches overlook indigenous knowledge of community-managed water and resource management, in favour of externally-imposed attempts to ‘modernise’ their ways of being. This is despite the fact that traditional ecological knowledge can significantly complement modern climate approaches; indigenous communities have, after all, adapted to harsh and changing ecological conditions for millennia. Subjugating traditional knowledge is particularly worrying given that 80% of the planet's biodiversity lie within indigenous territories (PDF) where local people are the primary knowledge bearers.

In considering the possibility of knowledge sharing between indigenous people and external actors, long-term processes are the most important factor; time is needed to build trust and understanding. The potential benefits of these collaborative alliances include creating culturally-appropriate and feasible methods of climate adaptation, building accurate climate prediction models by filling the gaps in modern scientific knowledge in regions where baseline data is sparse, and bridging the chasm between knowledge producers (those in charge of policy decision-making and infrastructure planning) and knowledge users (local people who are affected by those decisions).

Currently, efforts to share such knowledge are inadequate, eurocentric and, in many areas, non-existent. But this gap offers WASH NGOs the opportunity to facilitate and create safe spaces where traditional ecological knowledge can be shared and preserved. Importantly, any knowledge sharing must avoid exploitative exchanges where indigenous groups are expected to hand over age-old, intimate cultural insights without any guarantee that their own political demands will be realised. Incorporating indigenous knowledge into climate policy must be paired with efforts to tackle the institutional barriers to political autonomy and self-determination.

As we engage with G20 governments ahead of COP26 in November, WaterAid is calling for at least 70% of international climate adaptation finance to directly support communities living on the frontline of climate change. The principles of locally-led adaptation, as outlined by the International Institute for Environment and Development, aim to transform the systems that produce vulnerability to climate change in the first place. Of the eight principles endorsed by more than 40 governments, institutions and NGOs (including WaterAid), those we consider especially crucial to this discussion include:

Indigenous groups have an unmatched and vital understanding of the needs of the natural world. In forming solutions to tackle climate-water emergencies, influential international institutions like the World Bank, IMF and UN should learn from historically marginalised groups and integrate indigenous knowledge into their climate strategies. For example, in South Africa and the Democratic Republic of Congo, indigenous people have acted as co-managers of protected lands, while in Colombia, Peru, Fiji, Tanzania and Australia, indigenous insight has helped to inform national conservation efforts(PDF).

In the WASH sector, we should consistently seek to identify how our work can support culturally-specific climate solutions, and be guided by the perspectives of affected communities. How can we make sure that, in every step of our approach, we are informed by indigenous and other local knowledge and expertise? This will involve redefining ‘progress’ to celebrate the value of the various dynamic and innovative cultures that exist outside of western institutions.

As a sector, being part of the solution requires building up our analysis of the structural economic and geopolitical factors that determine whose interests are prioritised in the ownership and use of water. As climate change itself results from the unequal proliferation of consumer capitalism, this analysis should guide our engagement on climate change and its effects on indigenous and other marginalised communities’ access to WASH.

We must harness this global moment of reckoning to consider and implement alternative approaches to the governance of water and other resources. First, we must break down the false dichotomies that characterise our understanding of the sector – between nature and people, environment and human rights, and water governance and WASH access. Only then can we be part of questioning current arrangements, and work to shift the global political economy towards a truly democratic model of decision-making that values and supports equitable development and climate justice.

Investing in water, sanitation and hygiene for global recovery and resilience – report

Calendars and quizzes: how apps can help teach girls about their periods

Mission-critical: why investing in water, sanitation and hygiene is crucial to a healthy and green economic recovery