Isabel Mukelabai, Head of Policy, Communications and Campaigns, WaterAid Zambia, and John Garrett, WaterAid’s Senior Policy Analyst, Development Finance, argue that increased transparency and good management of Zambia’s Extractives Industry could make a fundamental difference in the prospects for progress for water, sanitation and hygiene and the Sustainable Development Goals.

A new report from WaterAid and Moore Stephens, 'Mineral Rights to Human Rights' assesses how the Extractive Industries (EI) contribute to the national economy and the scope to do more to strengthen domestic resource mobilisation (DRM) for WASH and development. Zambia is the world’s 8th largest producer of copper and the 6th largest producer of cobalt. The EI account directly for 70% of Zambia’s export earnings, 30% of Government revenue (US$ 1.5 billion), 10% of GDP and employ 1.7% of the population. The dominant role of the EI leaves the country vulnerable, however: lower copper prices combined with poor rainfall and power rationing to produce a near-crisis period for the economy in 2015-16.

In recent years, the EI have mobilised substantial FDI, expanded production volumes, and invested in improved social infrastructure in the Copper Belt, but the report concludes that there is scope for it to contribute much more to meeting Zambia’s development needs. Improved transparency and better management are needed if the country is to achieve value for money from its rich natural resource base, address its deep-seated inequality and help meet the substantial financing gaps for achieving the SDGs. The transition to a low-carbon global economy presents an opportunity for Zambia: copper and cobalt will be critical minerals underpinning the transition.

Low government revenues from the EI

Historically, the Government of Zambia has provided numerous financial incentives to mining companies through low taxes and low royalty rates, locking mining companies into favourable conditions. These policies have enabled significant new investment by the mining companies, but also explain relatively low levels of government revenue from the EI. General government revenue as a percentage of GDP was 17.3% in 2017, only slightly above the threshold estimated to be necessary to fund even basic state functions.

One study calculates that Zambia lost over US$300 million a year on average during the period 1998 to 2011. Another highlights oddities in the country’s trading relationship with Switzerland, with over US$28 billion of exports unrecorded in Switzerland’s national accounts.

Figure 2: Zambia share of income by decile and population living in povery, 2015 (%)

Off-shore influences on a land-locked country

Part of the problem is weak guidance around transfer pricing (TP)—the mechanism by which prices are chosen to value transactions within the same multinational enterprise. Steps are being taken by the government to address this, but the reliance of the largest mining companies on off-shore tax havens such as the British Virgin Islands raises the question who is really benefiting from Zambia’s natural resource wealth. Paradoxically, off-shore financial centres have a big impact on Zambia—itself a land-locked country. Despite its recent graduation to middle-income economy status, Zambia continues to face high levels of extreme poverty, which stands at 40.3%, and inequality, with a Gini co-efficient of 0.69.

Given the analysis above, it is clear that the EI can contribute significantly to increased DRM for WASH. According to government data, 6.3 million Zambians do not have access to clean, safe water and 6.5 million lack access to basic sanitation. A quarter of the rural population practices open defecation. Each year, cholera outbreaks lead to deaths that could be completely preventable. Why has Zambia not made much progress in changing this status quo? The reasons for this are in part related to chronically low funding of the WASH sector, leading to very poor service delivery and lack of fulfilment of these rights to vulnerable populations.

Achieving access to basic water, sanitation and hygiene (WASH) is estimated to cost US$186 million a year through to 2030. Current spending by households, government and external finance is around US$154 million. However, access to safely-managed WASH—targets Sustainable Development Goals (SDGs) 6.1 and 6.2—will cost over ten times this current level. There are also major sector financing bottle necks: public administration inefficiencies related to late, erratic releases of funding, the inability to attract alternative finance with improved sector governance, and the lack of a proper financing mechanism to ably support the sector. These problems have greatly compromised service delivery, which remains unacceptably low, particularly for urban sanitation and rural water and sanitation. 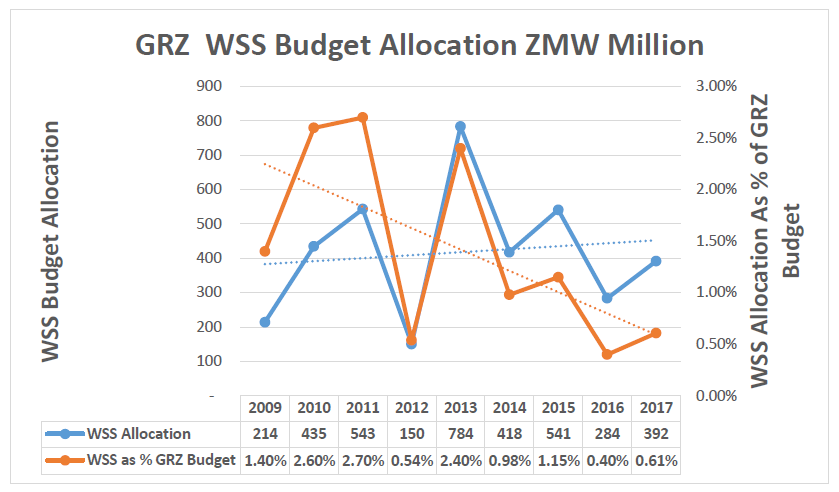 How can Zambia improve this picture and "turn copper into water", so that every citizen can gain access to good quality water, free from contaminants, in the right quantities and within a reasonable distance and time? The report concludes with several recommendations.