Turning waste into wealth in Tanzania

Just under a year ago, Waziri Mustapha worked as a ‘frogman': a dangerous job emptying pit latrines with buckets and shovels in slums and settlements around Dar es Salaam, Tanzania, where public services are lacking. Now, thanks to an innovative project that has turned waste management into a viable business, Waziri has a safe job providing the same service in a hygienic way and with a regular salary.

Like many cities in low-income countries, Dar es Salaam over the past few decades has seen unprecedented growth. Unplanned settlements have popped up all over the city, which often rely on unsafe water sources and inadequate sanitation, as public services have not been able to keep up with the population increase. In Tanzania, only 37% of people living in urban areas have access to a decent toilet.

The majority of these settlements use pit latrines that are not connected to the city’s sewerage network, causing major problems around liquid and solid waste management. Without any suitable places to dispose of solid waste, community members dispose their rubbish into the surrounding environment or into nearby water sources. The streets are often too narrow for trucks to reach and people either manually empty their pit latrines into streams, or pay ‘frogmen’ - community members who provide this service to the rest of the community - to do it for them.

A frogman’s work is dangerous: they do not have appropriate equipment needed to empty the pits safely and hygienically. Instead, they use buckets and work in the latrines without protective clothing, leaving them vulnerable to diseases. Some frogmen have died doing their work, often when heavy rain caused pit latrines to collapse.

It was clear things needed to change and WaterAid Tanzania, in collaboration with community leaders, local partners and authorities introduced a sanitation business model aimed at improving liquid and solid waste management in Dar es Salaam. This project was funded by Comic Relief UK.

The project focused on supporting three sanitation businesses to become legal enterprises and to provide training in how to run a successful business. WaterAid brought a reputable, local microfinance company, UTT, on board to manage the loans. Simultaneously, we worked with Temeke Municipal to ensure the businesses had the correct licenses and the right regulations were in place.

The businesses first got involved in solid waste, advertising their services in the community via posters and leaflets. With the loan, they purchased and hired the equipment they needed to be able to collect waste from households and dispose of it safely to a designated dumping site.

Kaisali Mgawe, the Director of one of the three enterprises, JAMKA, is happy with the results. "The environment used to be unclean and dirty. People dumped waste everywhere. Now, after educating the community, streets are swept and waste is collected every day. On average we are disposing of 6-7 tonnes of waste every day." 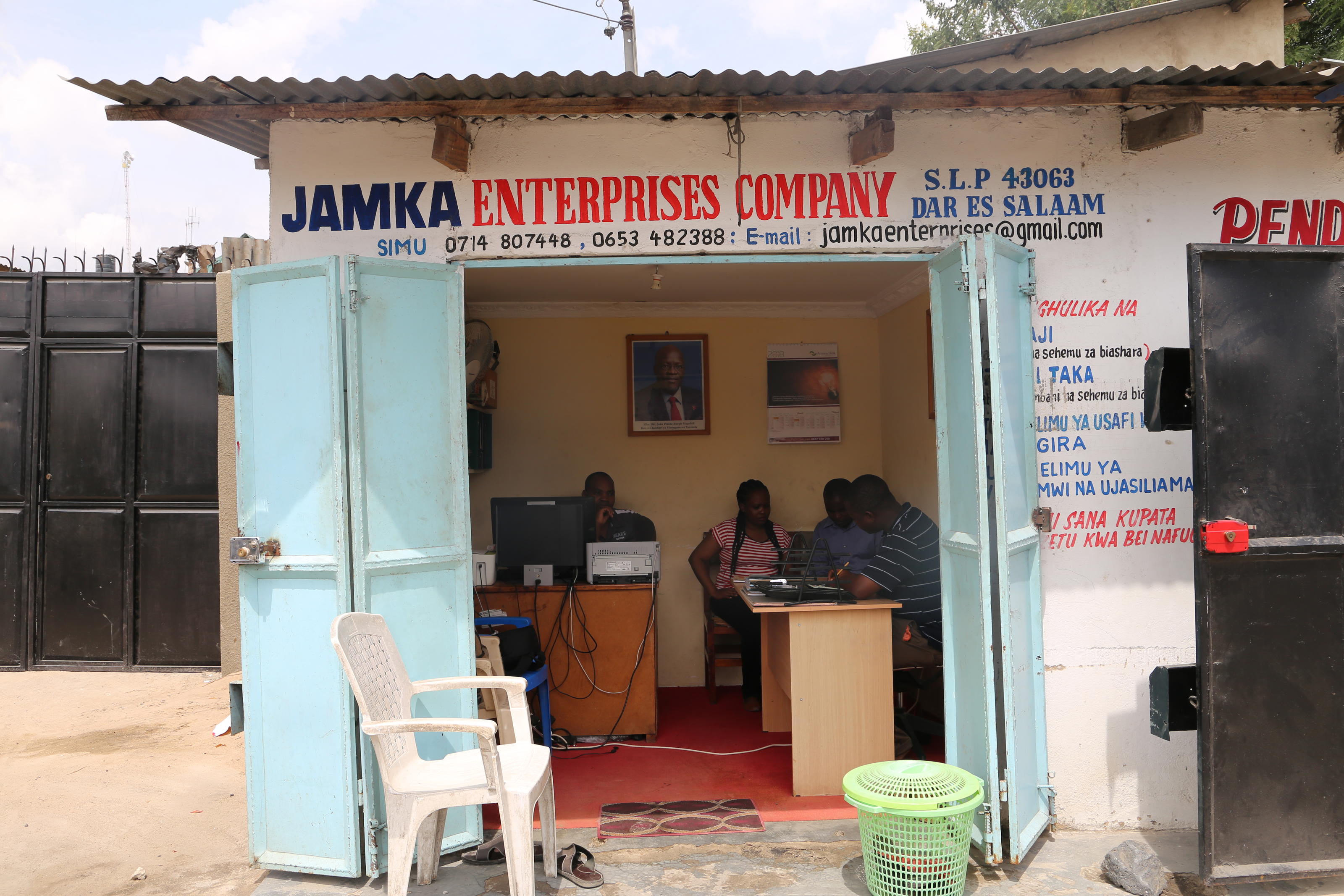 Outside the office of JAMCA, one of the three sanitation enterprises WaterAid has been working with.
WaterAid/Priya Sippy

To improve liquid waste management, a faecal sludge treatment plant was constructed by a contractor, with supervision from local partner PDF and WaterAid. This system recycles waste into manure, charcoal and biogas, which can then be sold and utilised. The plant will ensure that liquid waste is safely and hygienically disposed of, helping to keep the environment and nearby water sources clean and free of pollution.

Three in ten Tanzanians survive on less than $1.25 per day, so to ensure that services are available for everyone, people are offered the opportunity to pay for the service in instalments and the poorest receive the services at no cost.

JAMKA have increased their operational territory from four to seven streets, increased the number of employees from 15 to 25 and their customer base has grown from 10,000 to above 30,000. As a result, they have been able to double their monthly revenues. Emace, another enterprise, has expanded its operation territory from seven to 11 streets, increasing their customers from 9,000 to over 60,000 per month.

"I thank God for this project"

For Waziri Mustapha, the former frogman, the sanitation business has never been better. "My job as a frogman was very risky. The worst was during rainy season as it is when demand is the highest, but the conditions to pit emptying are very dangerous. I remember incidences like the collapsing of the diversion pits while my friends were in and friends slipping and falling into a latrine pit. I have now been working with JAMKA for 9 months and we work in safe and hygienic conditions, and I get a regular salary. I thank God for this project." 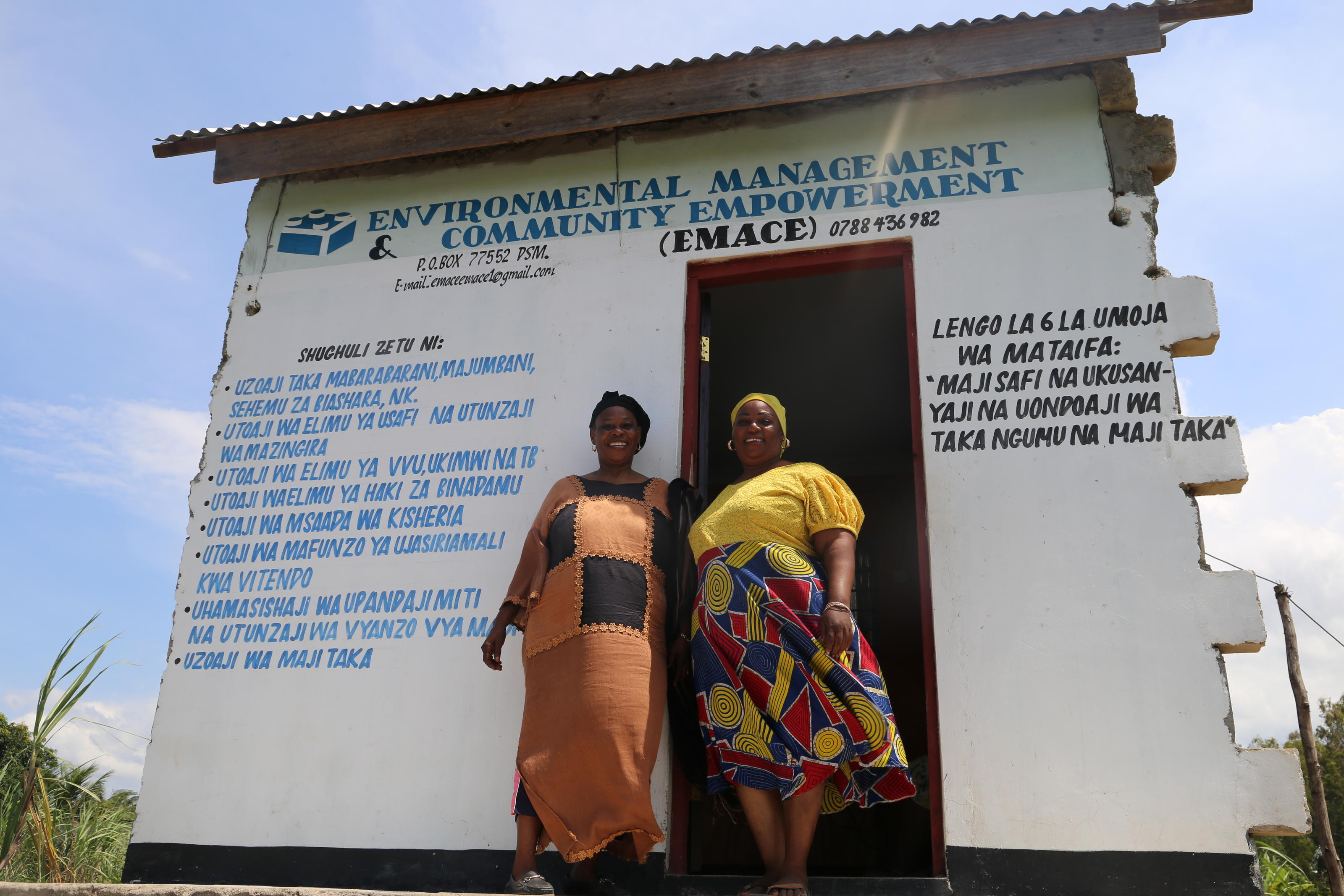 The business owners of EMACE – Environmental Management and Community Empowerment – stand outside their office. They are one of the three enterprises part of the project.
WaterAid/Priya Sippy

Sanitation business is a new concept in Tanzania, but the success of the project in Dar es Salaam shows that by turning waste into wealth, we can create viable businesses and safer working conditions. No less important, a clean water supply and hygienic waste disposal will stop the spread of diseases. It’s time to turn our waste into wealth.

This blog was originally published on IRC Wash >