EcoSan toilets: an alternative to conventional sanitation in vulnerable locations

WaterAid India has been experimenting with technologies that cater for the specific needs of communities in a particular area. With the help of our partners, one such effort is underway in the Korba district of Chhattisgarh state, where some areas have a high water table. This geological feature means a high risk of failure for leach pit toilets because of water contamination, which prompted our partners to explore the possibility of introducing EcoSan toilets in the affected areas. The initial intervention was in a handful of families in one village, and was later extended. 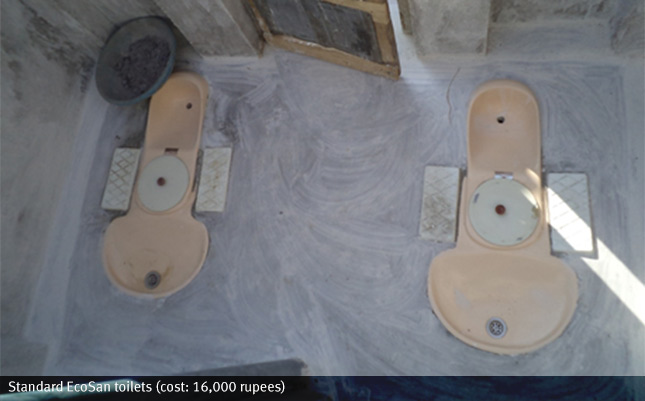 The inside of an EcoSan toilet.

The EcoSan toilet is a closed system that does not need water, so is an alternative to leach pit toilets in places where water is scarce or where the water table is high and the risk of groundwater contamination is increased. The toilet is based on the principle of recovery and recycling of nutrients from excreta to create a valuable resource for agriculture.

When the pit of an EcoSan toilet fills up it is closed and sealed. After about eight to nine months, the faeces are completely composted to organic manure and can be used on farms. When the first pit is closed, users can switch to using the second pit.

We initially used poly-fibre squatting pans for the EcoSan toilets, but because these were not available in Chhattisgarh and had to be purchased from another state the cost per toilet increased to around 16,000 rupees. This cost was not viable, because it made it difficult to get support from the Government's Nirmal Bharat Abhiyan programme (formerly the Total Sanitation Campaign), which can provide up to 10,000 rupees for the construction of household toilets.

To ensure the sustainability of these toilets it was therefore important to reduce the unit cost. Thus, instead of procuring the traditional poly-fibre pans, masons were trained to construct the floor of the toilets as EcoSan pans. This in-situ construction reduced costs substantially to just 12,000 rupees per unit, which could be further decreased by reducing the size of the pit, building the super-structure from locally available material such as bamboo, or making super-structure walls thinner. Together, these changes brought the cost within the range required by the Nirmal Bharat Abhiyan programme. 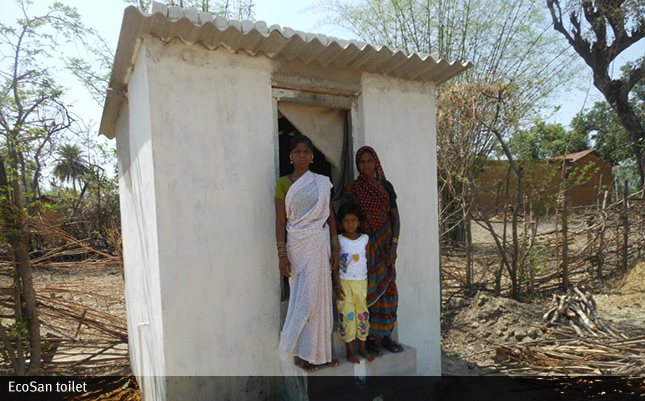 A family outside their EcoSan toilet.

The processes used to encourage families to first accept the concept and thereafter get them to use a different model of toilet have provided us with some definitive learning points:

Find out more about the technologies we use