As the World Bank Group hosts its annual meeting of finance ministers, donors and civil society representatives this week one buzzword is everywhere they look – ‘human capital’. Dan Jones, Advocacy Coordinator at WaterAid UK, argues that investing in water, sanitation and hygiene shouldn’t be overlooked.

#InvestInPeople is the straightforward hashtag for the World Bank’s ‘Human Capital Summit’ this week (every conference needs a hashtag these days it seems). It’s a smart re-framing of ‘human development’ aimed at catching the eye of finance ministers who spend most of their time frowning at economic growth forecasts and worrying about competing in the global economy. Rather than putting ‘jobs and growth’ in one bucket and ‘health and education’ in another, World Bank President Jim Kim is making a powerful case that ministers need to wake up and realise that strong economies hinge on countries having sufficient numbers of healthy, skilled and knowledgeable human beings.

Human capital consists of the knowledge, skills, and health that people accumulate throughout their lives, enabling them to realize their potential as productive members of society. We can end extreme poverty and create more inclusive societies by developing human capital. This requires investing in people through nutrition, health care, quality education, jobs and skills.
– World Bank, Human Capital Project

It’s a pretty instrumentalist concept, positioning us humans as labour assets whose ability to perform work should be maximised to produce greater economic value. So it sits perhaps uncomfortably with those who would prefer to remind governments that every person has inalienable human rights, and governments have a duty to ensure the provision of quality healthcare, education, water, sanitation etc. to all their people so they can live dignified, safe, happy lives. But – let’s set that philosophical debate aside for another, much longer blog.

As I’ve been reading all the PR around Human Capital, I’ve been struck by just how integral and essential water, sanitation and hygiene (WASH) are to these aims – and yet how invisible WASH is from the framing. A study by Professor Stephen Lim and colleagues published in The Lancet last week aimed to provide the comprehensive conceptual underpinning for the summit, including an analysis of the human capital status of 195 countries. At the summit, the World Bank will use this data to launch a ‘Human Capital Index’ that, Jim Kim says, will rank countries and should be used “to hold finance ministers’ feet to the fire”.

The index draws on a range of health and education indicators that have proven links to productivity. Many of these are closely interlinked with WASH. For example, the index uses data on child growth (stunting) – evidence indicates that a quarter of all stunting is attributable to repeated bouts of diarrhoea in the first months of life.1 It doesn’t take a rocket scientist to know that dirty water and poor toilets cause most cases of diarrhoea, killing a child every 2 minutes.2

…for good health, education and more

Beyond the well known effects of repeated diarrhoea, researchers have highlighted3 that malnutrition and WASH are also interlinked in multiple indirect ways. Think about how the lack of a water supply affects food production, or how money to buy nutritious and diverse foods is diverted towards paying for expensive clean drinking water, access to a safe, private toilet or medical expenses resulting from diarrhoeal diseases.

A diagram from the WHO’s first-ever ‘Sanitation and Health Guidelines’, published last week, illustrates the multiple routes between poor sanitation and poor health: 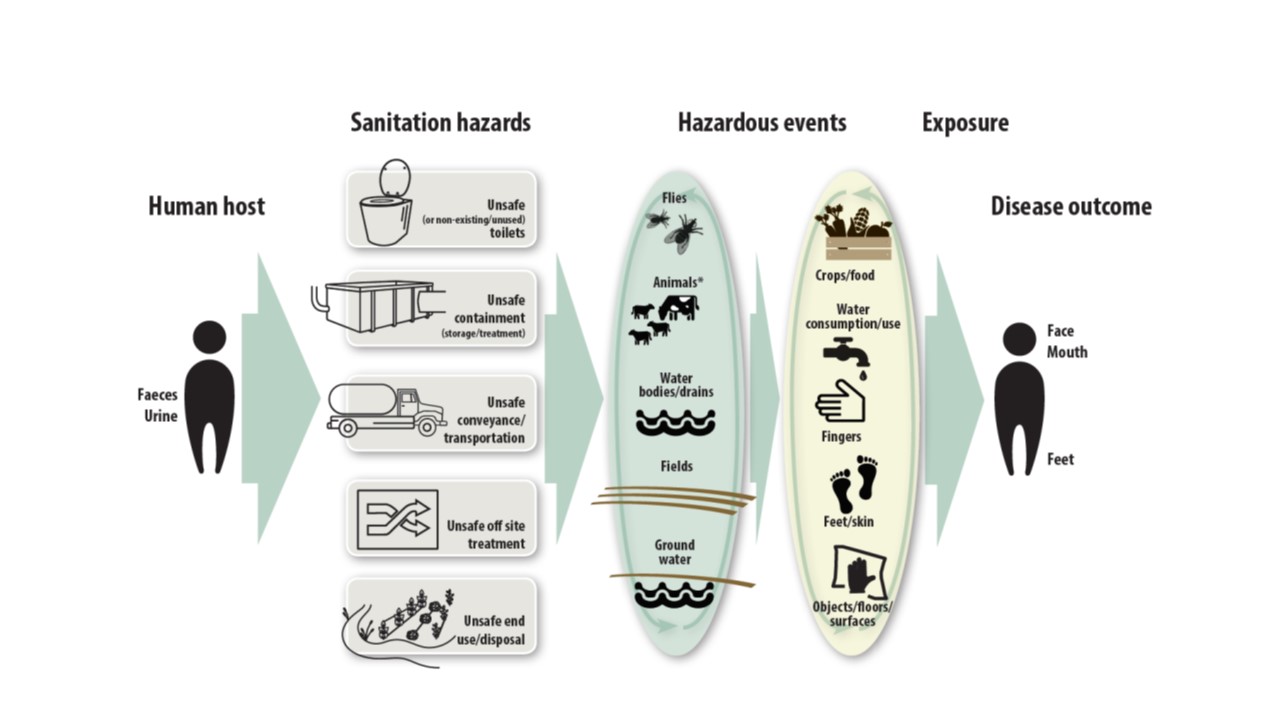 The index also incorporates anaemia, which can result from blood loss caused by hookworm and other infections contracted because of poor WASH. The index adds in infectious diseases including neglected tropical diseases (NTDs) like schistosomiasis and trachoma – almost all NTDs are WASH-related.

What about on the education side of the equation? The Human Capital Index uses data on school enrolment and quality of learning as part of its scoring. The health consequences of poor WASH in the first years of life mean that many children’s cognitive development as well as physical growth is damaged, often irreversibly, before they even reach school age. Imagine then getting to school and trying to focus on the teacher and the blackboard when you’re thirsty, racked with stomach cramps, and hungry because intestinal infections are preventing your body from absorbing the nutrients you need. It is a tragedy that this is the daily reality for families without adequate WASH.

When children get to school, too often this is only the beginning of the challenge. New data published this summer showed that more than 30% of schools do not have a basic drinking water service, and more than a third do not have basic functioning sanitation. That’s more than 620 million children worldwide who cannot use a toilet at their school, and have to painfully hold their bladder and bowels all day. Now imagine that you’re a girl beginning menstruation. A lack of WASH in schools fundamentally undermines the ability of millions of girls and boys to gain a quality education.

A lack of safe water, sanitation and hygiene results in loss of dignity, safety, health, education and – yes – economic potential. It is at the heart of ‘human capital’, if that’s how finance ministers want to think about it. WHO estimates that for every US$1 invested in sanitation there is a nearly six-fold return as measured by lower health costs, increased productivity and fewer premature deaths.4 The World Bank says promoting good hygiene is one of the most cost-effective health interventions that exists.5

Yet WASH sectors are chronically underfunded in most developing countries, and less than 4% of donor aid goes to WASH.6 At current rates of progress, it will be 2066 before everyone everywhere has access to water, and 2102 before the whole world has basic sanitation.7 As finance ministers from low-, middle- and high-income countries gather to discuss human capital, we hope they’ll invest to change that.

How to navigate complex development environments with adaptive programming

How can Nigeria fill the funding gap to address its state of WASH emergency?

What does evidence on nutrition and water, sanitation and hygiene mean for programming and policy?