But what do we really mean by political will?

Despite its widespread use, within the sector there is only a broad understanding of the term. Although a vague definition might be sufficient to highlight the neglect of sanitation and call for governments and agencies to give it increased priority, it might be a problem when one tries to figure out what to do with it when it manifests. 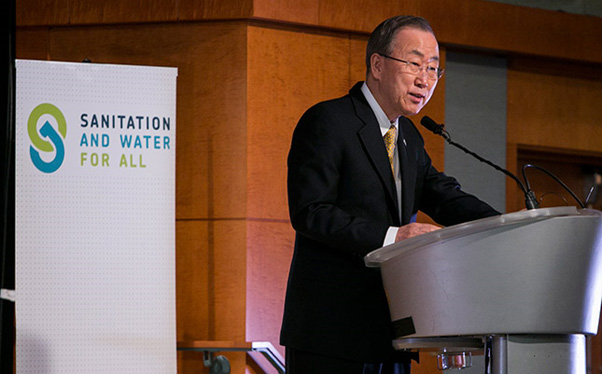 Low political will has been and still is a crucial blockage of progress in sanitation – so long neglected and surrounded by taboo. But over the past few years its priority has been gradually increasing and reached unprecedented levels. We have seen sanitation enshrined as a human right and become a global target under the Sustainable Development Goal 6, to name just two examples. At the national level the picture is mixed; but, for instance, in India, home to two thirds of those defecating in the open, sanitation is one of Prime Minister Modi’s top priorities.

It’s time to get up to speed with this push, unpacking the idea of political will and shedding some light on the mysterious ways through which it can turn into action and solve the sanitation crisis.

At WaterAid we have been making efforts in that direction for some time now. On the basis of our research in South East Asia and other experiences, we have come up with this simple but hopefully useful framework to understand how political will plays out in a given country, breaking the concept down into three parts.

One part is the high-level political commitment – commitment to sanitation progress at senior levels of government, with Modi in India being the extreme example. For this to go beyond the rhetoric and drive real progress, the commitment has to translate into two extra parts: prioritisation of sanitation across government levels and departments; and course correction processes that enable identification of and adaptation to implementation challenges. If prioritisation were the engine driving progress in sanitation, course correction would be the rudder, enabling responsive adaptations through policy, legal, and institutional reforms. Both are necessary to successfully navigate the complexities of sanitation and advance towards a strong sector able to deliver universal sanitation services.

The role of incentives

We commissioned the Overseas Development Institute to conduct research to explore in practice exactly how this translation of commitment into prioritisation and course correction happens. We visited three countries and focused on the role of incentives in shaping this process as a way to understand the political economy behind it. We looked at three subsectors where there is evidence of a certain degree of high-level political commitment: urban sanitation in Indonesia, and rural sanitation in Ethiopia and India.

We saw that two main types of incentives are at play in the translation of high-level political commitment into prioritisation.

First, there are incentives that work by aligning sanitation with the world views of elected leaders, officials and implementers through an appealing narrative. They are encouraged to ask themselves “Do I believe in this cause?” and to play their part. For example, in Indonesia it was the aspiration for a smart, modern, and competitive city that encouraged the mayors to buy in to the sanitation agenda.

Second, there are incentives that created political buy-in through the prospect of personal and professional advantage – “What is in it for me?” – tapping into desires for political gains, career advancement, and personal renown.

Other incentives were hindering prioritisation, such as imbalances in the decentralisation process, and differences of power and status between different departments involved in sanitation. In Ethiopia, for instance, the sanitation portfolio is led by a small unit within the Ministry of Health that does not have the clout to drive prioritisation across other ministries.

Turning to course correction, although incentives linked to world views have a positive influence, professional and political advantage represent a double-edged sword. They can increase the likelihood of stakeholders at lower levels sharing information from the ground for policy review. In India, for example, the exposure to political superiors was motivating juniors to participate actively in WhatsApp groups used to share information. However, the same incentive was observed to lead to over-reporting for reasons of prestige or career advancement, and to under-reporting to attract extra resources.

Sector reviews and other formal and informal learning mechanisms then play an important role in ensuring the information shared actually results in corrective action. However, interviewees reported that the excessive numbers of workshops and meetings disperse “attention and focus, with most stakeholders limiting their level of participation”. In turn, this resulted in a weak drive to follow up on review decisions.

Two key recommendations emerge for national governments committed to delivering universal access to sanitation, and for external stakeholders trying to foster political will.

First, to cascade political prioritisation to lower government levels and across critical ministries. How?

Second, to invest in timely course correction to address bottlenecks. How?